It’s officially the season of “sod it, its Christmas”. Midweek drinks? Extra cheese? Spent all your wages as soon as you got paid? Sod it, it’s Christmas. Boyfriend cheated on you? Why not send him a personalised card listing all the things you didn’t like about him… It’s Christmas after all! 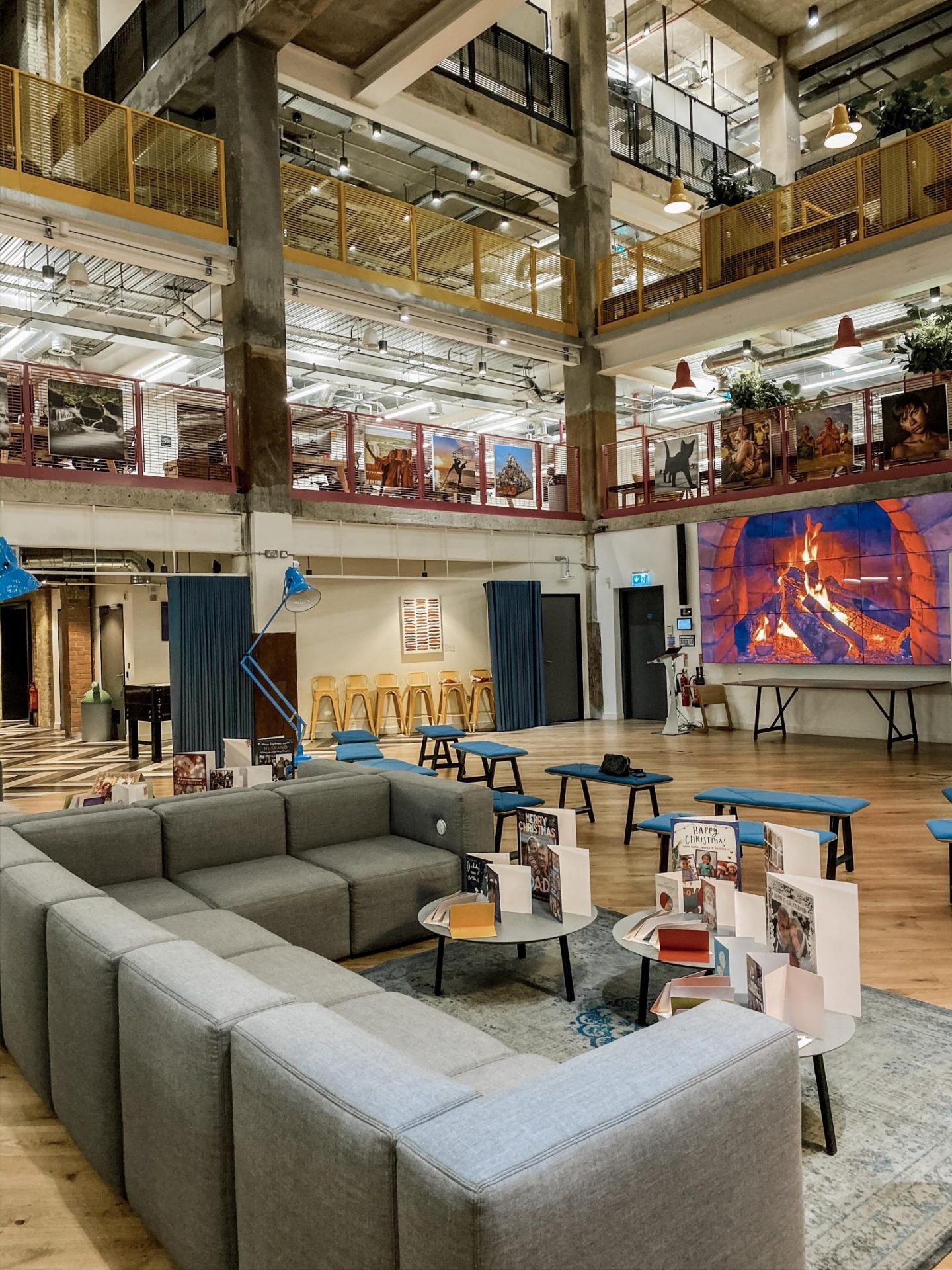 Those that know me well will know that I sit firmly in the former category. Wrap me up, cover me in tinsel and fairy lights and throw me up a tree. Christmas decs, teas, carols, gifting? Here for all of it. So when I received an invite to the #HeartfeltWithMoonpig Christmas event I knew it wasn’t just going to be the tree getting lit this year!

The evening was split up into three sections, each representing a type of personalised gifting offered by Moonpig. As I’d only ever created cards using Moonpig I was intrigued by the other two activities, which were cocktail making and flower arranging. Spoiler: I’m a crap crafter, but God loves a trier…

We were split into teams and shown how to make three cocktails, under the headings Taste/Speed and Flair. First up was the “taste round” where we were pitted against each other to make the tastiest Gingerbread Mojito. Safe to say we didn’t win this round, the table wore most of the ingredients but the results were very drinkable – if that’s even a word?

Next was the speed round where we raced to make the best Port of Call cocktail. Our team had it in the bag until I malfunctioned with the strainer, yep I literally managed to mess up pouring cocktail out of a shaker, well done hun! 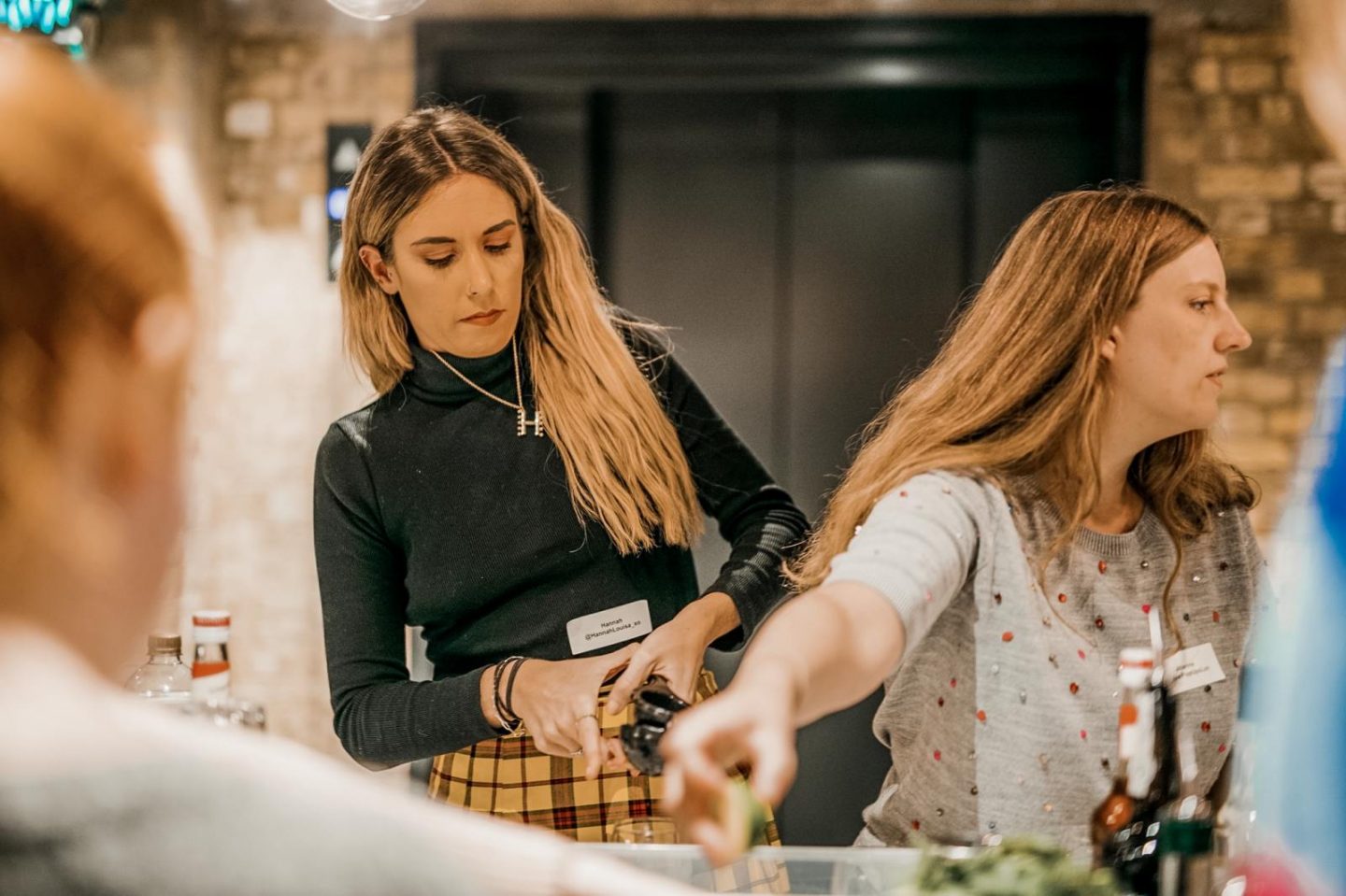 The third cocktail we tried to make, I say tried as the barman told us this one was undrinkable – I’d strongly disagree tbh but he’s the expert! We had to show our “flair for entertainment”. Again I demonstrated how to make a hot mess as the girls nominated me to make a Christmapolitan. I made the cocktail with my eyes closed and hands tied behind my back. Cue an abundance of champagne down my skirt. Ho Ho Ho…

Moonpig sells all the spirits used for the cocktails above which make for a super cute addition to a Christmas dinner party. Unless like me you’re banned from making cocktails at group gatherings – there were a few separate incidents with blue liquid staining furniture a congealed baileys concoction and a few broken glasses. But that’s a story for another time.

Next, we made personalised Christmas cards, complete with green screen and optional Santa. Never one to shy away from a potential photo op I threw myself at Santa for the ultimate Christmas photo, please see below… 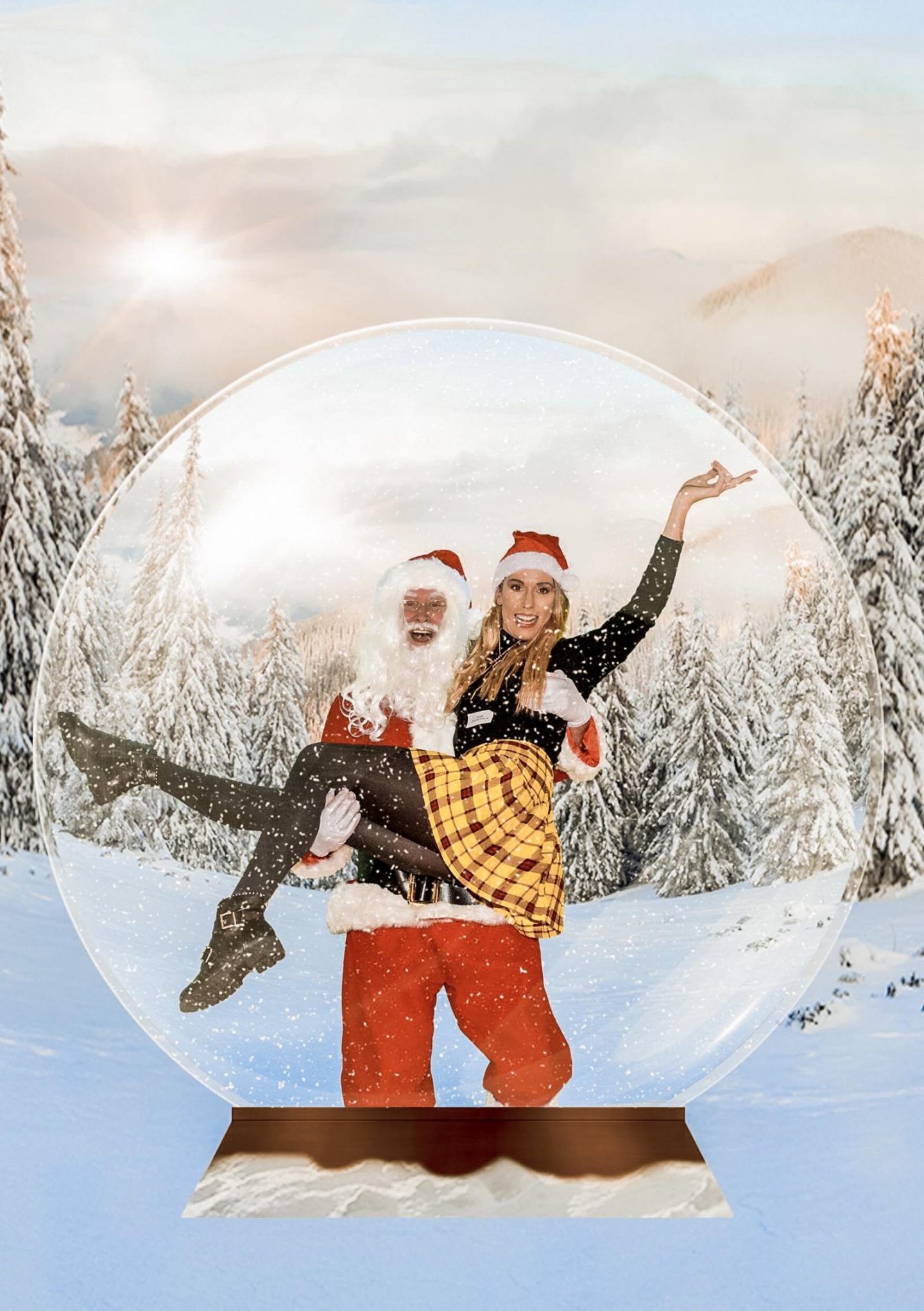 We then selected our card template and added our festive photo and text which took no time at all – the hardest part here was choosing which Christmas card template to use. I think Santa might say the hardest part of the activity was lifting me up. He was quite vocal at the amount of effort it took to get me off the ground, much to the amusement of everyone else watching. But I think we totally nailed the pose!

NB: There’s also a strong possibility that I managed to get my own address wrong and may have potentially sent my Christmas card, adorned with the above photo, to a complete stranger. Pray for me.

If you fancy your own personalised Christmas card Moonpig have a whole bunch of great templates available if you would like to brighten up a friend’s living room with a picture of your face.

As I may have mentioned before, I love to craft but I’m really crap at it. No sooner had I been instructed on the flower arranging, I’d poured water down my leg and fully got my tinsel in a tangle. 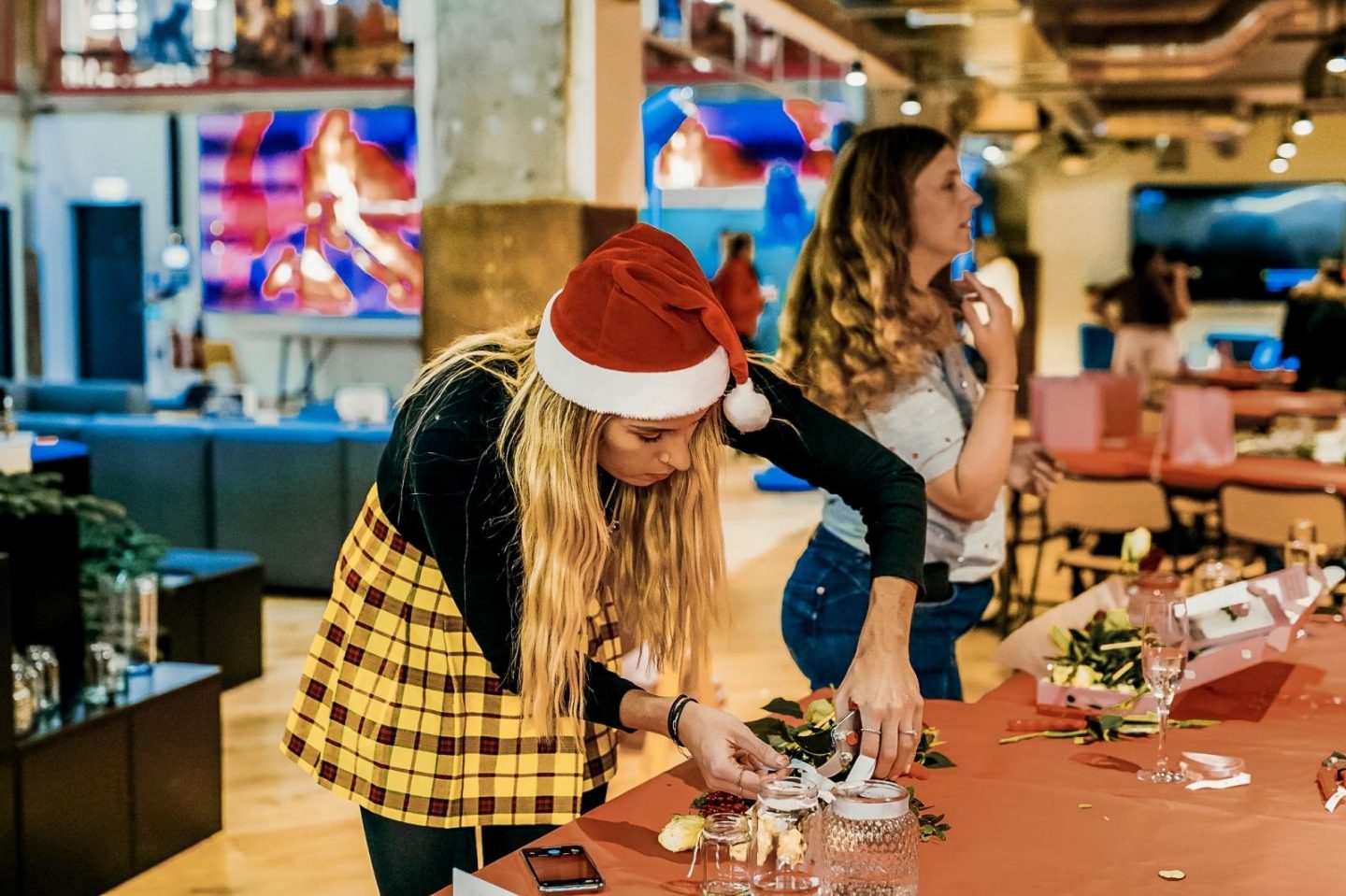 I gave it a good go but after having a left-handed situation with the secateurs I’d then opted for a pair of scissors and was too busy looting glitter foliage to pay enough attention to the overall look. Which was a bit of a mess… Once Han’s hedge (my loving nickname for my flowers)  had been rescued by the Moonpig team it was time to snap some photos of them and enjoy another glass of prosecco.

Moonpig flowers can be selected based on the occasion and come with cute little extras such as a vase or bottle of bubbly. You can also choose “letterbox” flowers as a nice surprise for a loved one (my flower arranging services not included). 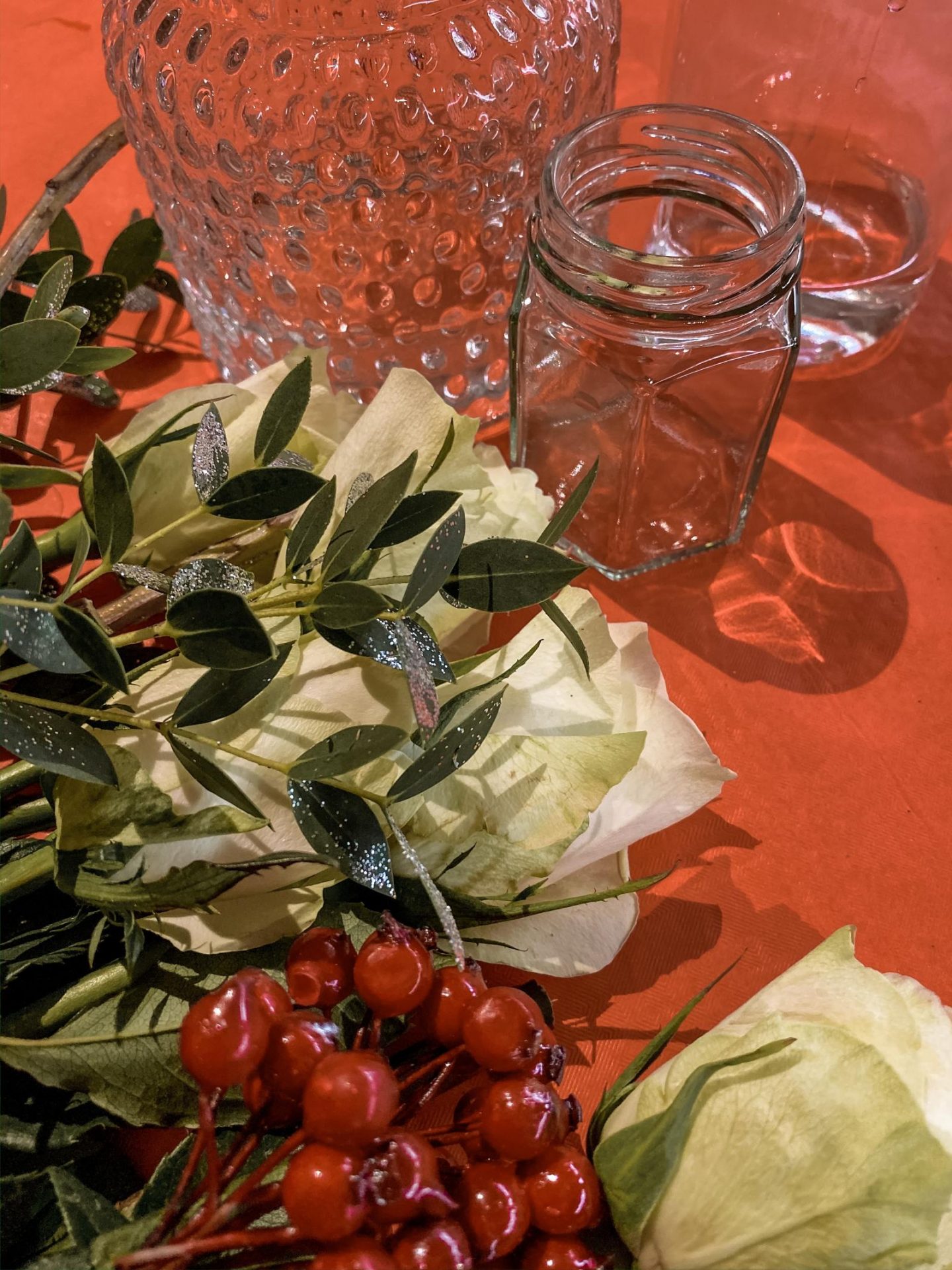 I’m not really a “Christmas gift guide” kind of gal – possibly due to my friends and family being a little unconventional when it comes to gifting, but I’m a huge fan of personalised gifts. Also at the risk of sounding like a terrible human a big plus of buying from Moonpig, is that they deal with all the wrapping and postage. 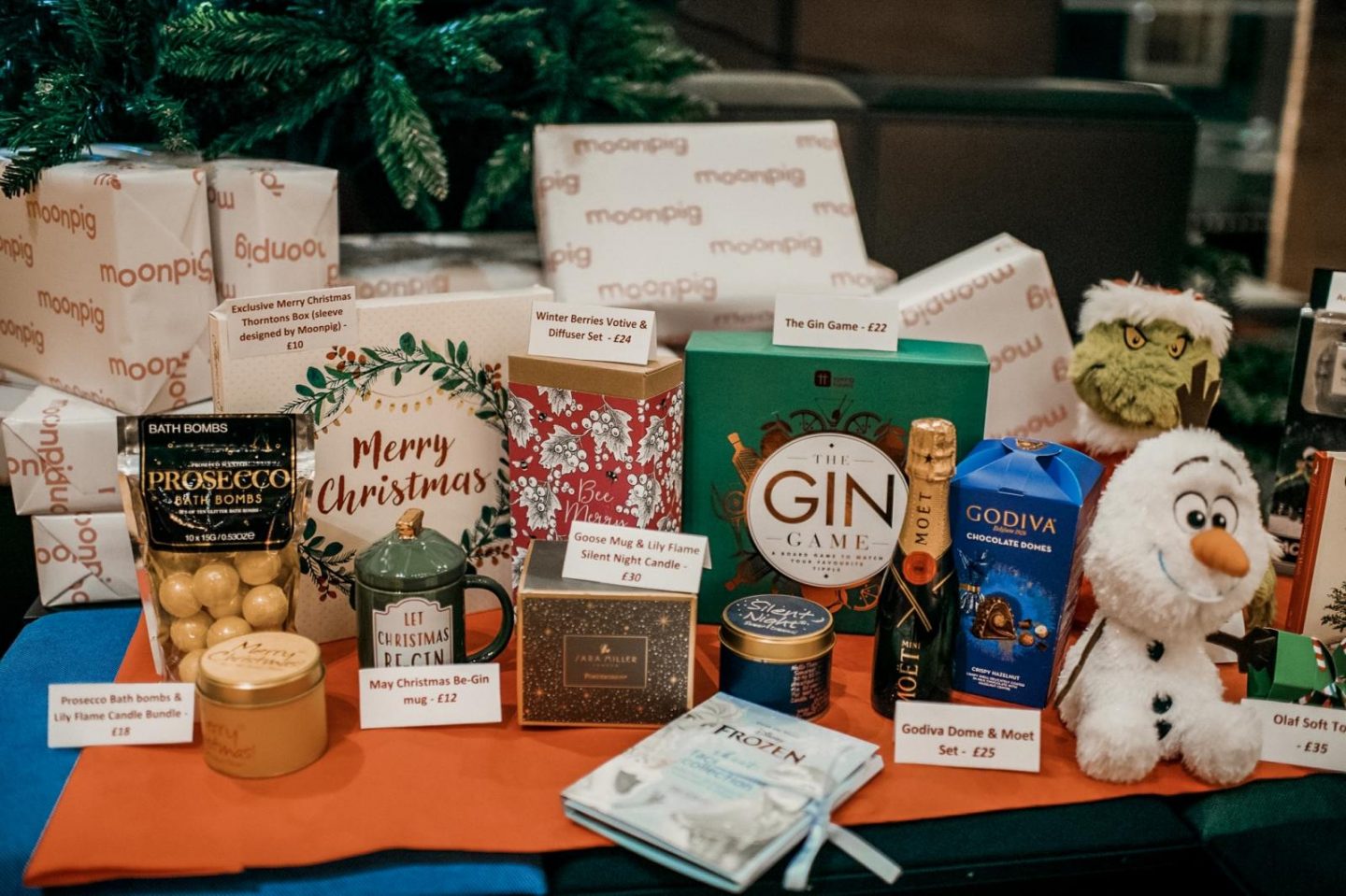 If I have to waste one more lunch break in a post office queue listening to Deidre’s dinner dilemmas or hear about Jan’s neighbours missing cat I will not be held accountable for my actions.

Thank you to Moonpig for a lovely festive event! And if you’re looking for personalised cards or gifting with no added post office palavas you can shop their range here

*I was kindly invited to the #HeartfeltWithMoonpig Christmas event– where we were gifted complimentary food drinks and activities in exchange for blog coverage. But all opinions are my own.