Our next few days started well, heading off to a place that we couldn’t pronounce- despite multiple attempts. The vlog at the bottom of this post documents the full extent of our failure, the correct pronunciation is A-Yoo-Ta-Ya, please note how many variations we concocted!

We used the Thai version of über (Grab) to get to the train station which was great, god bless air con,(apparently taking it all the way to our next destination was a no from Dem’s money saving app. We do seem to be doing slightly better with our budgeting though, despite spending a third of our daily budget on Chang beer!

We were a bit nervous about our chosen mode of transport from Bangkok to Ayutthaya. We’d picked a third class train ride which cost 30 Bhat for both of us, for the 1.5-hour journey(about 60p)!

Although we had done some research and read some travel blogs and the general consensus is that the train is a cost-effective and culturally immersive way to get from A-B. If I was affronted by the hose that appears in every public restroom, this was nothing compared to the toilet on the train which was literally a metal hole in the floor.

If you were wondering.. we decided to wait until we got there. After just a few days we’ve become so grateful for the most basic things, like a clean toilet with toilet roll! Mid-train journey I’m busy minding my own business, looking out at the beautiful scenery, when a clear plastic bag flies in and attaches itself to my face. I thought it was a pigeon and absolutely shit myself. Dem’s only comment being, I wish I had that on camera – pretty sure I’ve been brought along purely for entertainment purposes. Clear plastic bags are used for street food so it’s typical to see these handed out all over central Thailand.

The most amusing thing is that if you order a bottled fizzy drink from a stall, they’ll fill a plastic bag with ice then tip the drink into the bag and ditch the bottle. I mean it’s already cold and in a bottle, am I missing something?!

Ayutthaya is SO much quieter than Bangkok making you feel like you’ve escaped the tourist trail and entered into your own little piece of Thailand. Dem had booked a few nights in a boutique hotel (easing me in – cheaper than the previous place & no pool – we’re getting better). The only problem being, that it was a 15 min walk from the station in midday heat with backpacks strapped to us, “our first bit of true backpacking”. T

he struggle must have been obvious as the Tuk Tuk driver doubled back twice to check if we wanted a lift. When Dem refused the third one I could have elbowed him if I wasn’t lagging behind so much! 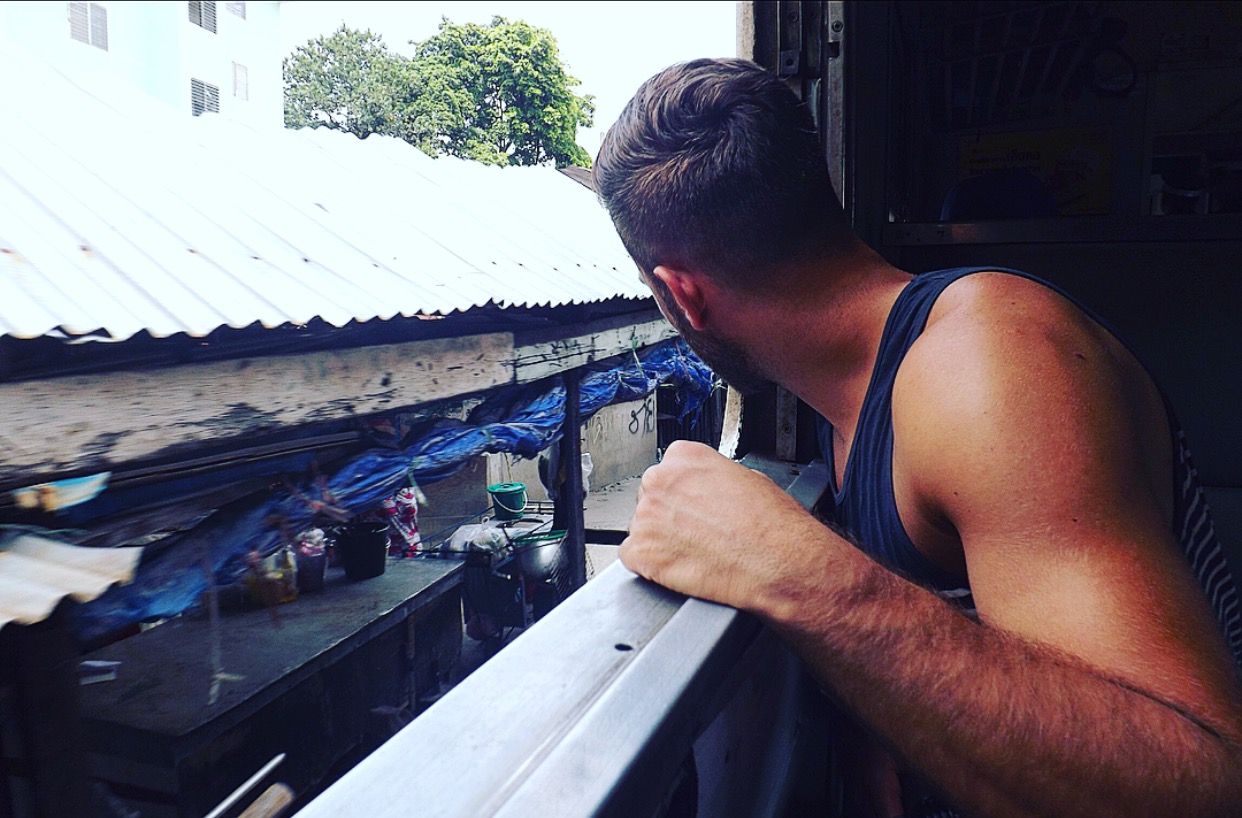 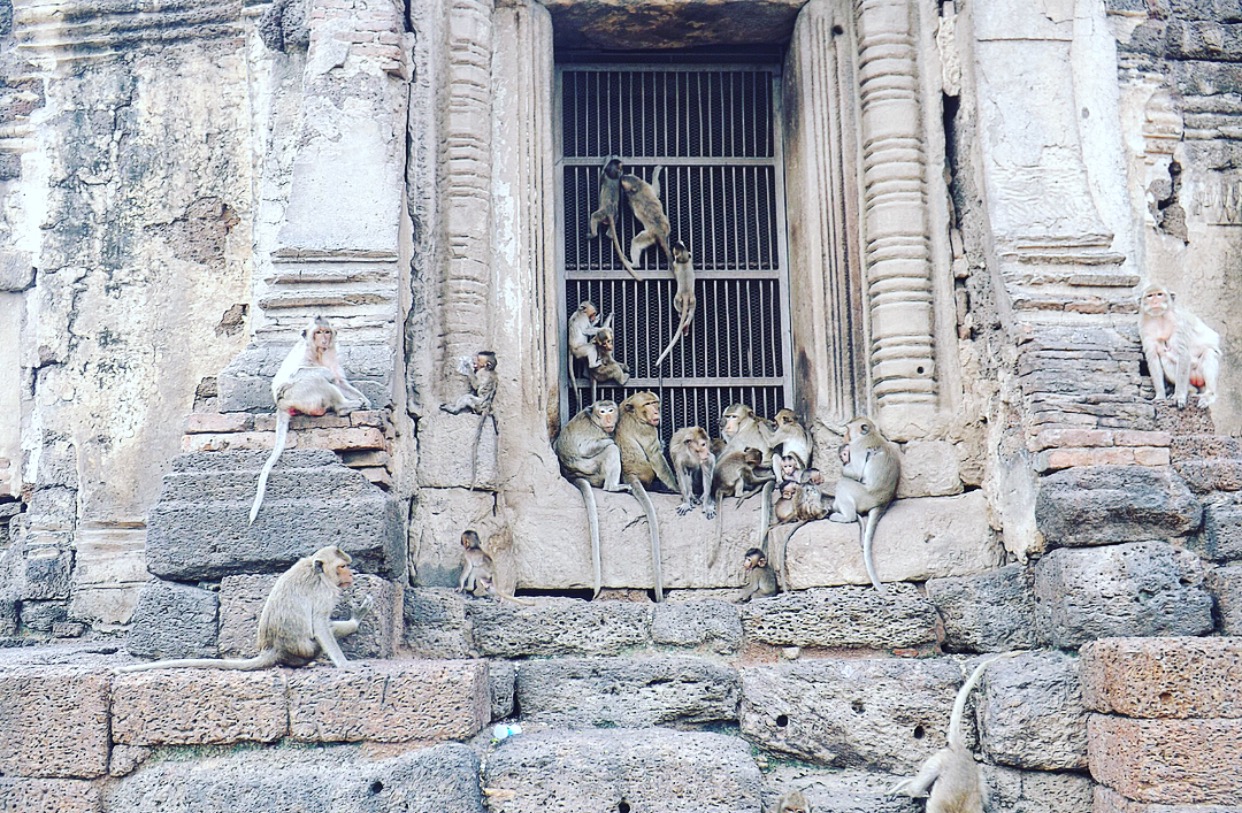 We rented a moped to visit the temples – which not only proved to be a great way of getting around but also gave a welcome respite from the intense 32-degree heat as we whizzed from site to site. On arrival, I’m running around getting the best light and angles thinking I’ve just been hired as an author of Lonely Planet. Dem, on the other hand, doesn’t deal too well with heat or my constructive feedback on his pics, so by the end of the day, he looked like he was ready to crack me over the head with the go-pro.

The monkeys of Lopburi

Our favourite activity so far was a visit to Lopburi – most famous for being home to a troop of resident monkeys. We visited the monkey temple, where monkeys have their own agenda and will happily use you as a climbing frame and see if there’s anything on you they can steal or eat. Despite leaving with a chewed belt, THE worst hair and little sandy footprints up my back I’d 100% do it all over again. Being able to interact and feed the monkeys is definitely a once in a lifetime experience and besides, when else are you going to be able to play a real-life version of temple run?!

Such a good day almost makes up for me buying Thai conditioner thinking it was body wash and using it for a solid three days before realising my mistake. At least our skin will be flexible and smooth!

After a full on few days of site-seeing Dem made the mistake of sighing and saying, “what I would give for a pool right now, I’m all templed out” can you even imagine the amount of smug on my face?! So now we’re now on route to the next place and you’ll never guess what our new lodgings in Sukhothai has…