First thoughts on Cambodia? The people are SO welcoming and happy and the money is so damn confusing! We’d read in a few blogs that riel and dollars were both accepted but what we didn’t bargain for, is that they’ll accept both, but if you pay in dollars you’ll you’re likely to get change back in riel. Which will absolutely fuck with your currency confused brain.

The first stop on our Cambodian adventure was a visit to the S21 museum and the killing fields in Phnom Penn. The entire day was an emotional roller coaster. Our Tuk Tuk driver gave us some background on the war and we then hired an audio guide. Our audio guide talked us through each building including individual stories and family interviews which pushed me over the edge and I had to have a little time out. The killing fields were also interesting to visit, in terms of visiting the place where the massacres took place, but we both felt that the prison pulled on our heartstrings slightly more. Definitely worth seeing but prepare yourself for the worst and take some tissues!

We seem to have picked the lucky gene with drivers (our Tuk Tuk driver was actually called Lucky) and we broke down. For a solid 15 mins we sat roadside while he went to get his bike fixed.. & as the polite Brits that we are, we sat, we smiled and we waited. 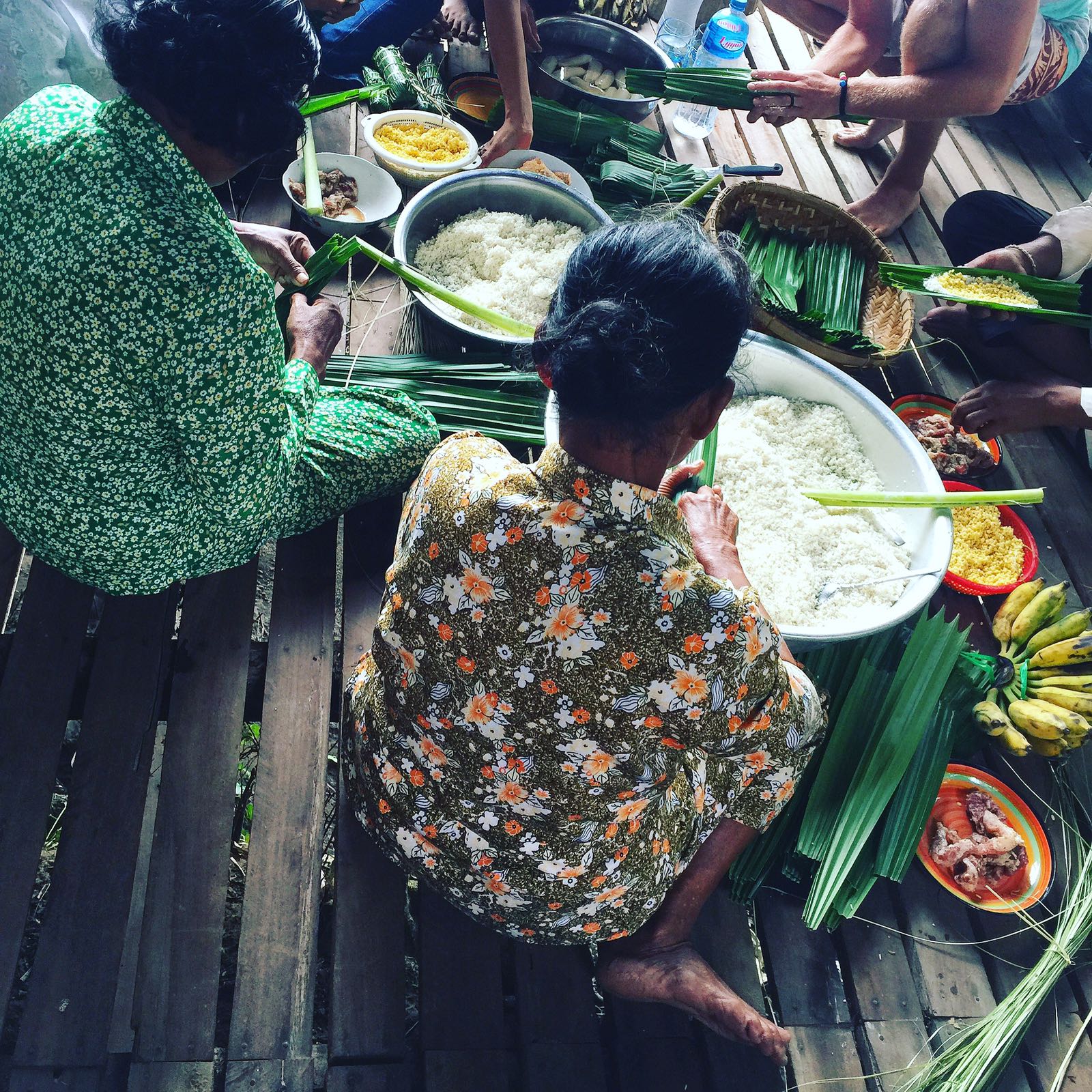 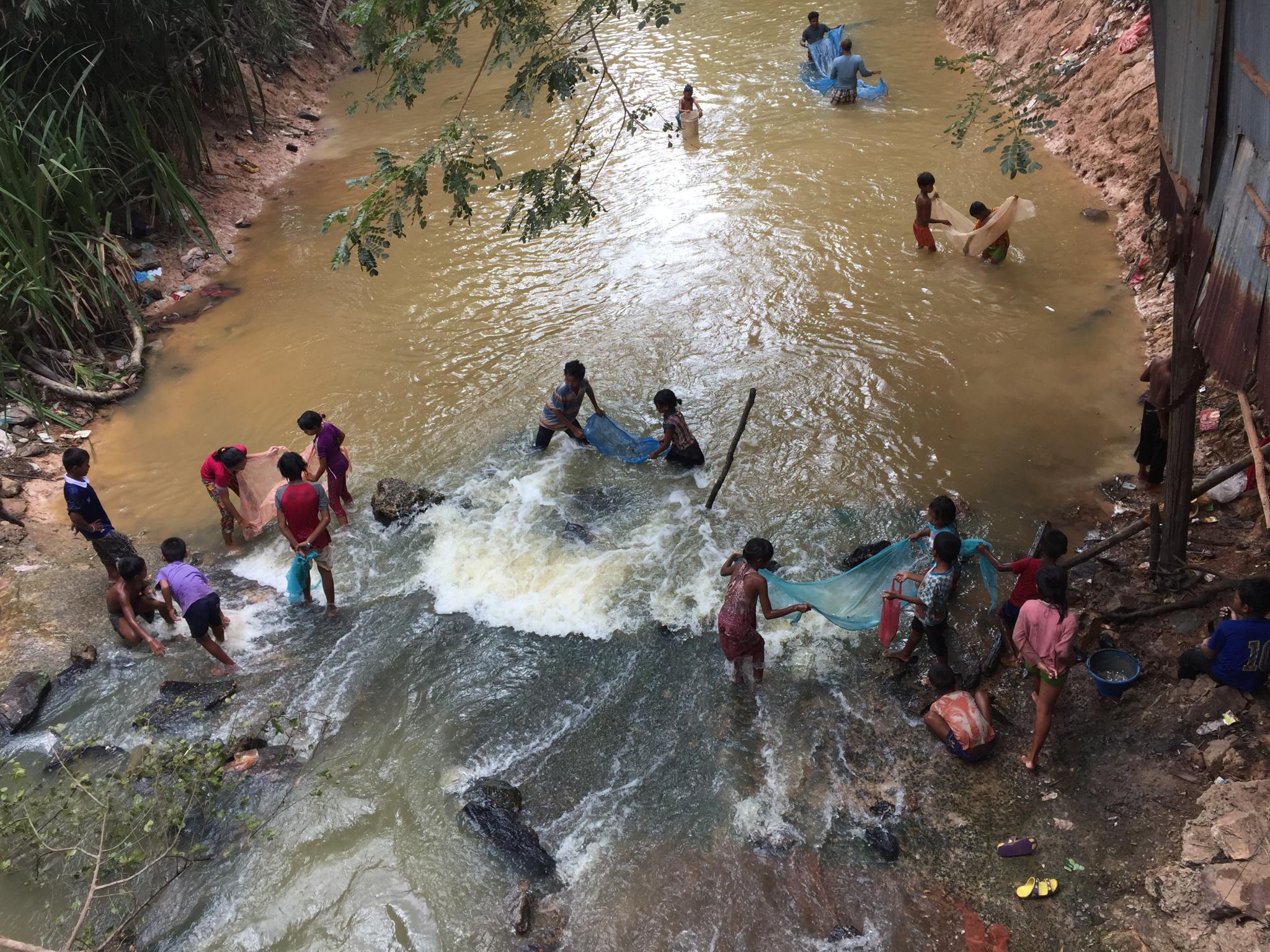 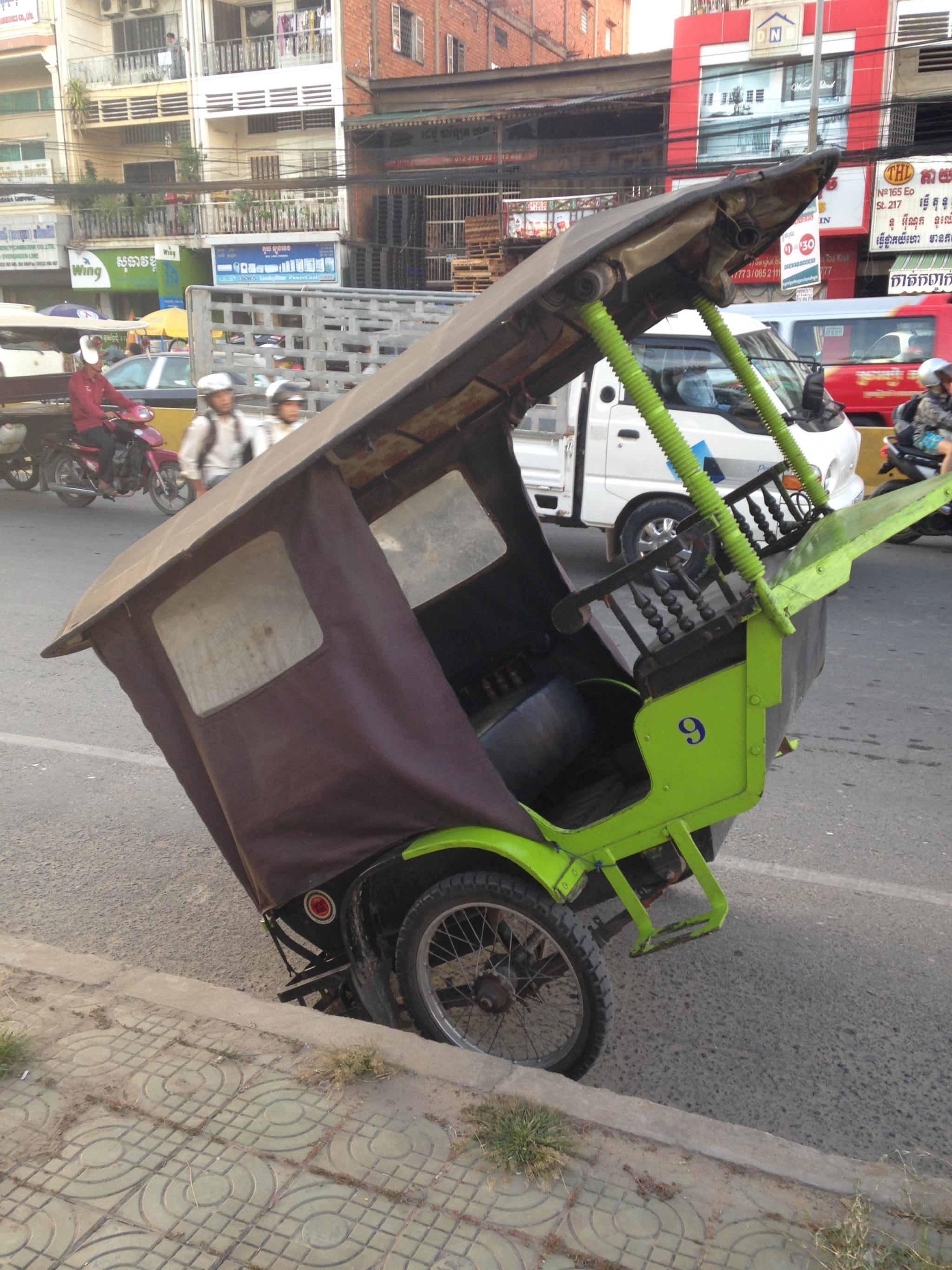 At dinner by the river, there were a whole host of children trying to sell bracelets and homemade jewellery. One kid tried to sell us a bracelet outside the restaurant and initially, we weren’t interested with my wrist starting to look as if it was starting up it’s own career in tatty bits of string! He started chatting to us in amazing English and connected us to the wifi at the restaurant we were seated outside. He then proceeded to add himself on Facebook and sat down to show us some of his fave YouTube videos. Safe to say my bracelet collection immediately grew by two & Dem offered him a job in 6 years time!

We jumped on the 7 am bus to Kampot arriving at 11 am at the most beautiful treehouse guesthouse by the river. We didn’t have many plans for Kampot we’d just heard that it was super chilled and worth a visit! Not only did we have our own treehouse bungalow between the four of us but they had the most relaxing music playing, beds and hammocks by the river and puppies and kittens running around freely. Total dream!

On our first morning I awoke to laughing and music, in front of me was a circle of locals all rolling rice in bamboo to make Khmer cake. We were encouraged to sit with them and learn how to roll our own, they were very patient. Which is just as well as let’s just say rice rolling is not my forte! I must say as much fun as the party scene had been, it was lovely immersing ourselves in Cambodian culture and exploring a totally new way of life

(Note: I wasn’t saying that the evening previous when I was screaming the bungalow down thinking a giant bug was circling our bed, which just turned out to be the reflection of the fan on the mosquito net. You live and you learn)

We hopped on a ferry from Sihanoukville to Koh Rong with a quick stop off at the cinema for a viewing of Elf with a side helping of pizza (bomb.com). The ferry was supposed to be a cool 30mins, instead, it was 1.5 hours of hell. The sea was being a total diva and we were thrown about like rag dolls. The engine decided to start blowing out black smoke and people were vomiting left right and centre! The driver then hopped down to cut off whatever was tangled in the propeller with a scuba mask and pair of scissors! My conscience was screaming health and bloody safety, but my heart was yelling cut that fucker loose and let’s get outta here! 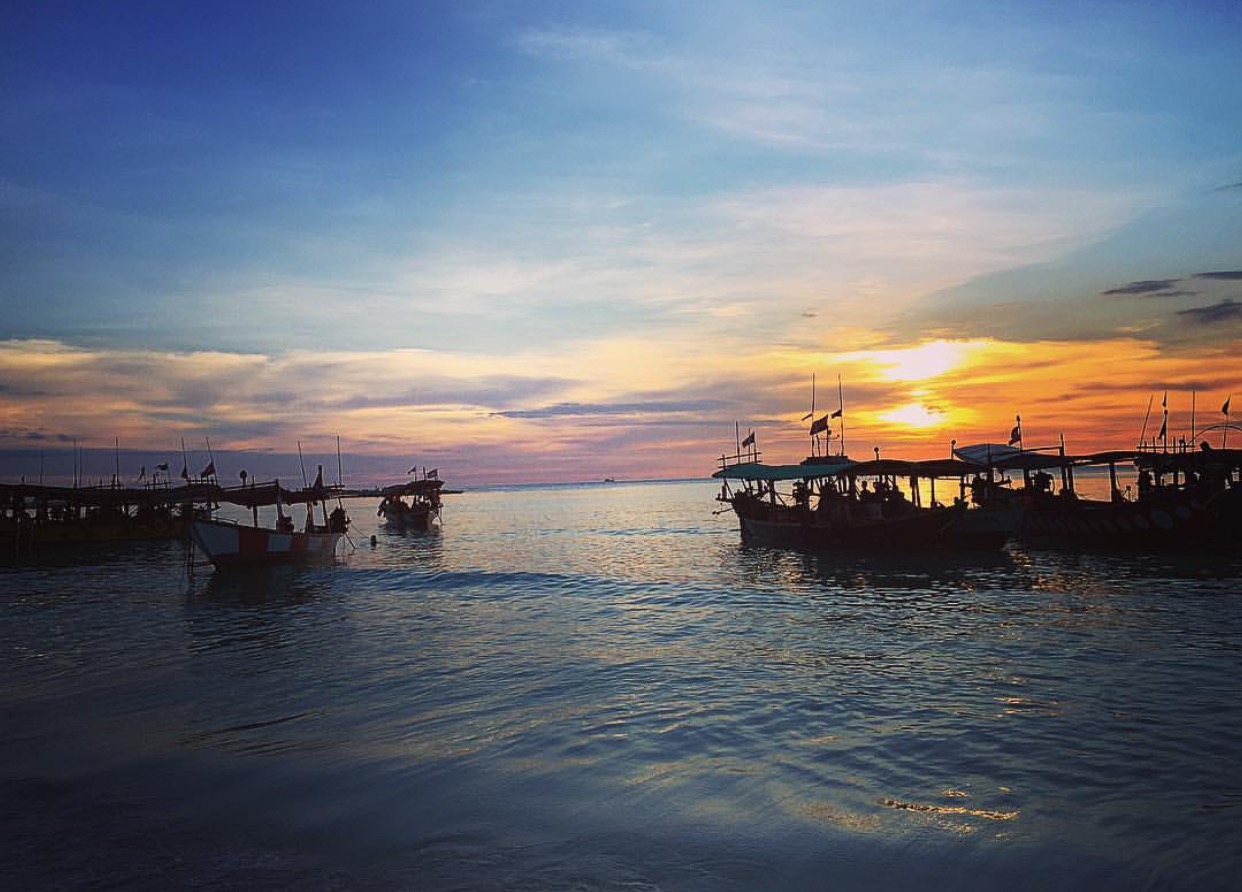 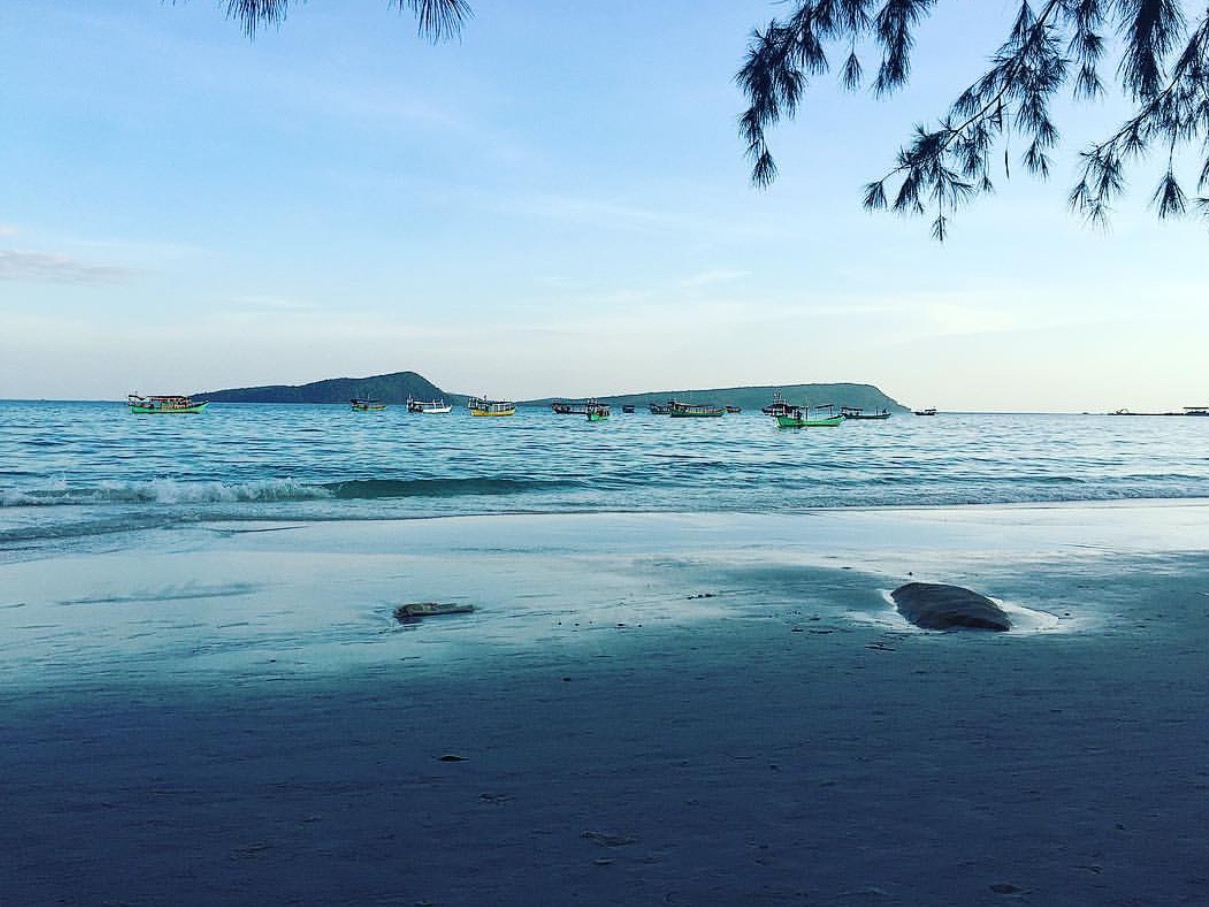 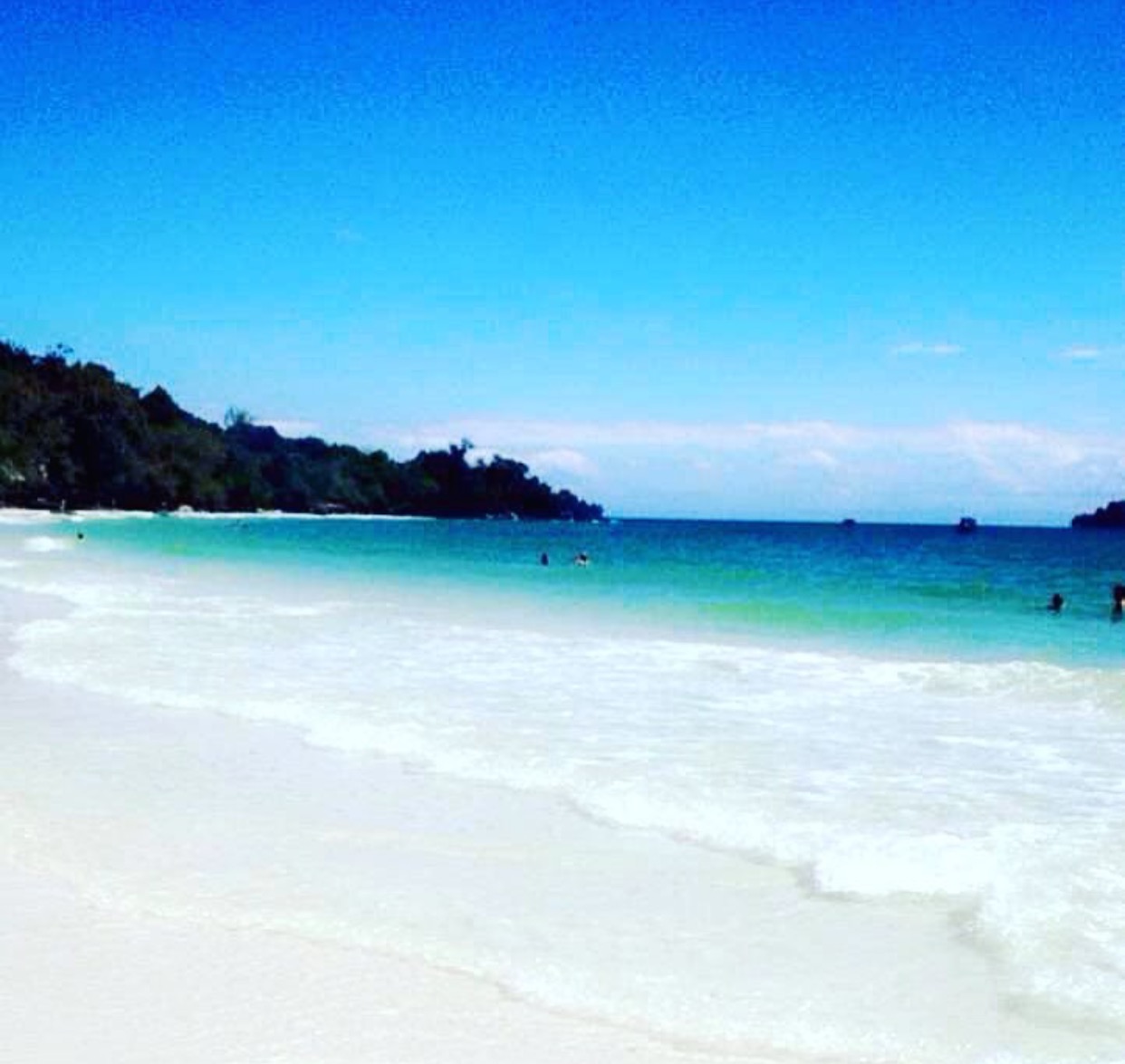 The most beautiful place I’ve ever seen

Ok, so let me tell you about Koh Rong. The island of no shoes. Completely understand why people get stuck there because as soon as you sink your feet into the rolling clear waters you will not want to leave. I wonder how many travellers have sat on the gleaming white sands and crafted business plans to enable them to stay forever (I mean towel rentals and lilos would be a winner – just saying).

The Island has only been inhabited in the last 25 years and it feels as if you’ve just discovered a little piece of paradise. There are BBQs up and down the beach and cute little bars and street food stalls literally spilling into the sea. We went to the Nest beach party which is located on the 4K beach and you can get a boat there and back for $4 each but obviously being the savvy travellers that we are thought we’d just walk the mins there. Which would have been fine if we hadn’t been torch-less, surrounded in darkness and having to do an impromptu jungle trek… Our advice. Get the boat!

Whilst in Koh Rong we managed to obtain some nice suntans and a not so nice Cambodian stomach bug. As a couple we share everything but we were also sharing a room with 2 of our friends, oh and we had no running water and no flushing toilet. So we had to source buckets to flush the toilet and run down and fill them from the sea (thanks Jan) meaning we were taking part in the saddest relay ever, all bloody night…

The upside of having food poisoning – you don’t spend any money. Because you can’t move or even consider food or activities. Koh Rong really is the island that keeps on giving. Not only does it give you stunning scenery, a great party scene and good food but it also gives you a dodgy tummy so that you can stay within budget!

On our last night, we popped to Skybar for drinks and nibbles. I ordered some bruschetta (missing mumma’s home cooked delights) and they brought me out a family-sized serving. No joke I counted 16 bits of bruschetta, for a moment I thought I should be circulating around a dinner party?! But all the same great food and worth a visit.

Last on our Cambodia hit list was Siem Reap. We were expecting to arrive at 8 am, with check-in not l until 10 am. So just imagine the joy of a 5 am arrival! Cue sleeping on sunbeds wrapped in towels. Travelling is great, but glam it is definitely not! 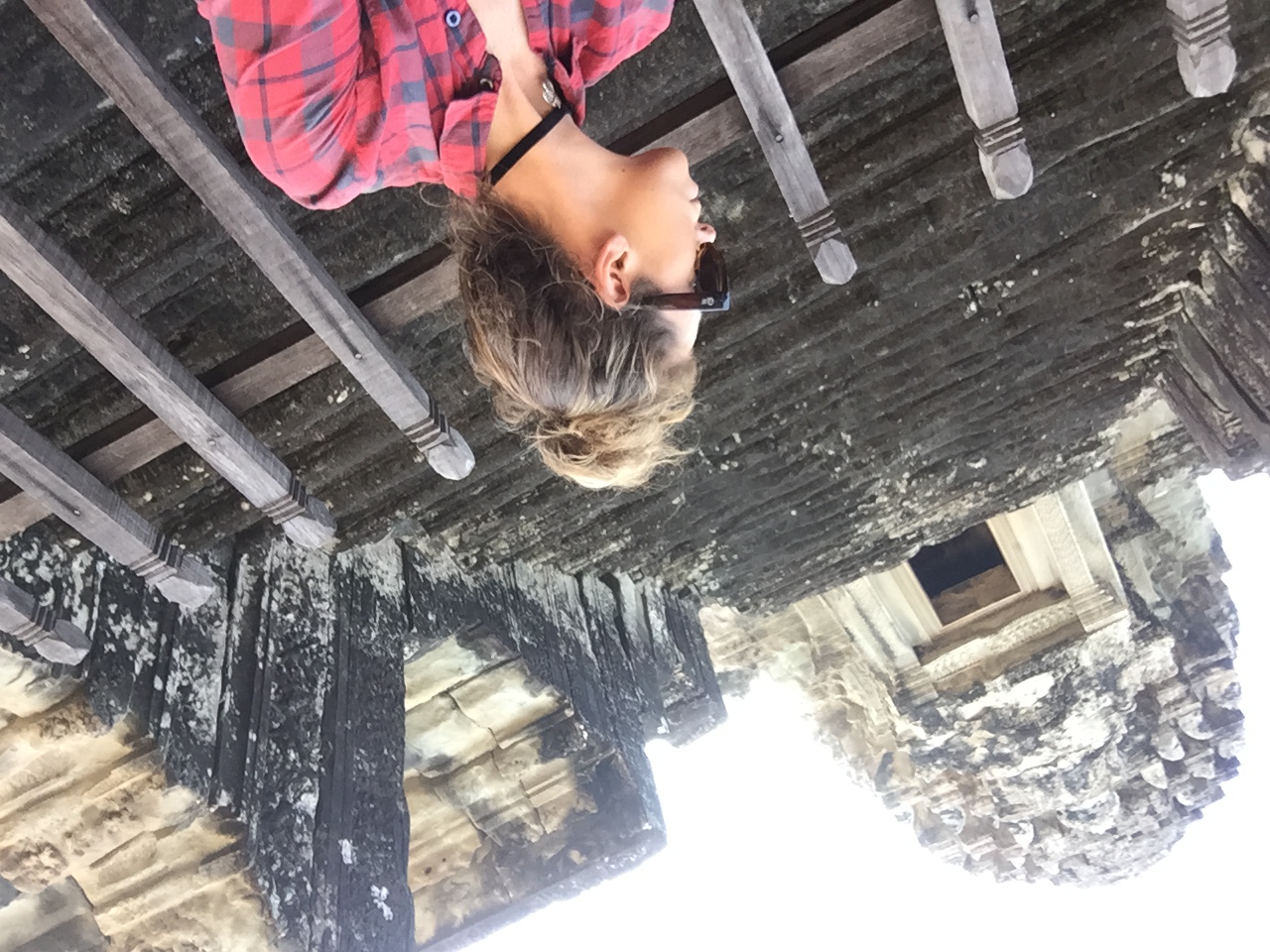 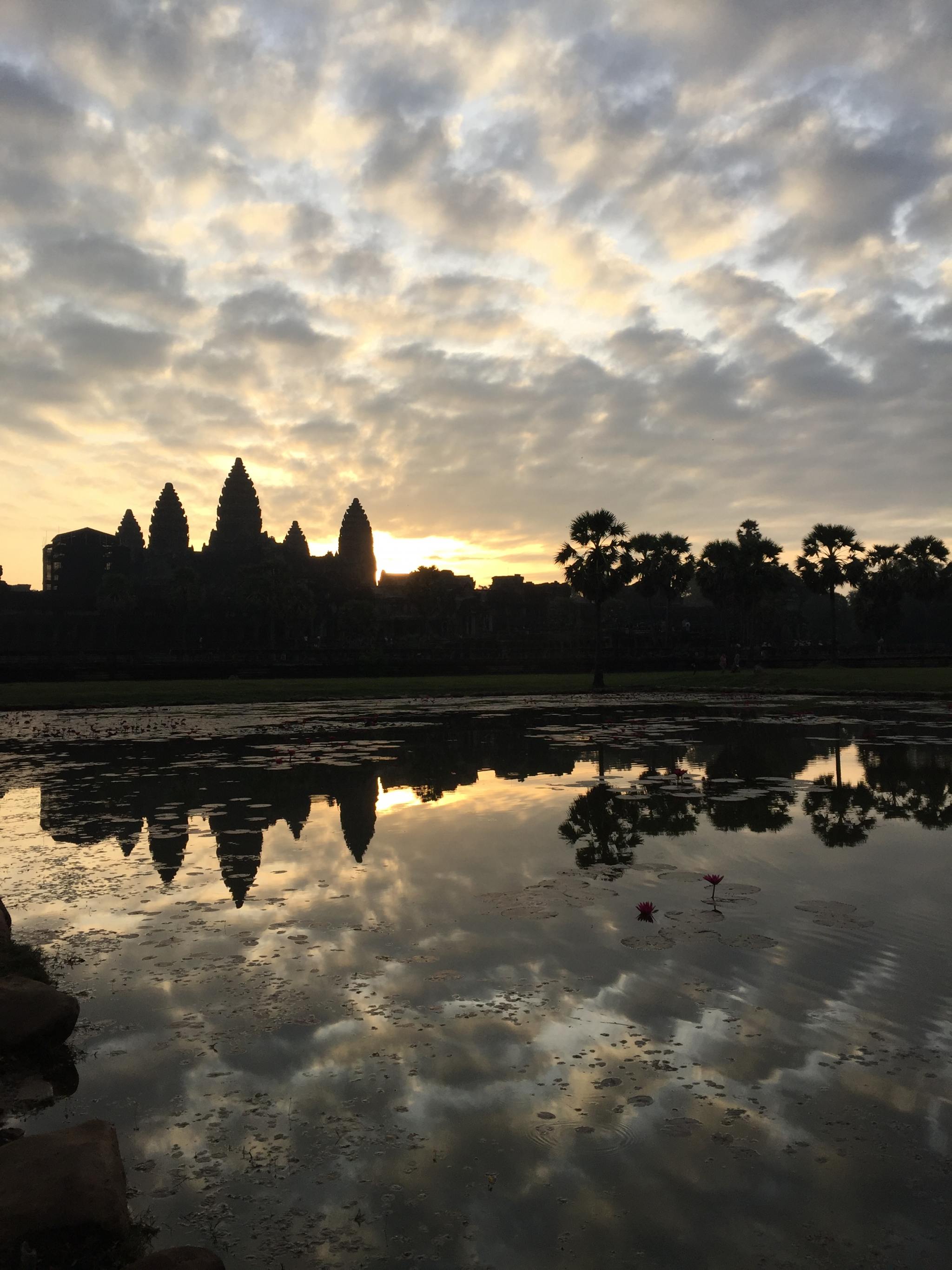 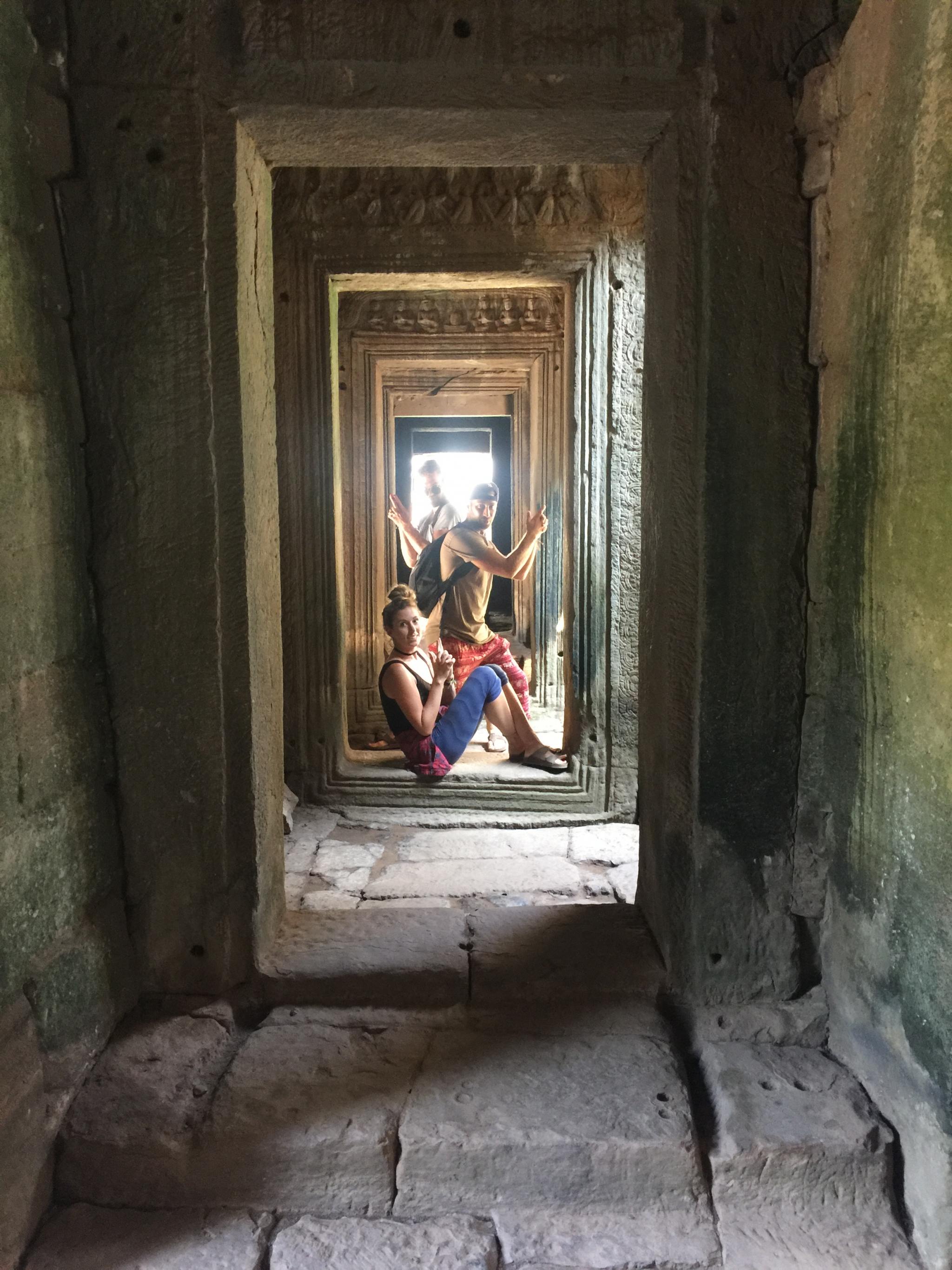 We got up to see the sunrise at Angkor Wat which was a 4:30 am start (anyone that knows me, understands how much I struggle with mornings). We’d befriended a Tuk Tuk driver the day previous so a quick WhatsApp ensured he’d be ready and waiting outside our hotel.

Sunrise at Angkor Wat was beautiful, but I did feel as if I was at M&M World in Leicester Square as I navigated the sea of tourists, selfie sticks and peace signs in search of a good photo. After 8 hours of solid temple behaviour, it was time to head home after treating our Tuk Tuk driver to lunch.

In true Demi & Hannah fashion, we decided to go big the night before we travelled to Bangkok. Securing a 5 am bedtime, setting my calculator as an alarm and narrowly missing the bus. Resulting in a guaranteed day from hell whilst we crossed the border into Thailand in preparation for our flight from Bangkok to Myanmar.. well done team!