I was SO excited to arrive in Vietnam, we flew in and had our very own taxi waiting to take us to our hostel. We’d already booked our room and were heading for the street stalls to pick up Halloween attire for a huge party!

On arrival in Vietnam, there are actual road markings for things like lanes, traffic lights and speed limits… Which is a HUGE difference from the dust tracks of Laos. The sky is pink and the air is cooler – you know when you get a good feeling for a place instantly (like when a restaurant brings your food out right away – that’s exactly how we felt).

Our first evening brought a Halloween party so we dropped off our bags and us girls ran off to source costumes. Our hostel was serving free beer, buckets for £3 and buy a bucket get a free balloon. You can imagine how that ended!

Waking up covered head to toe in glitter we set out to explore Hanoi. The first thing I set my eyes on was an elderly lady decapitating live fish outside our hostel, as you do. As I’m staring at this, three mopeds speed past horns blazing and nearly knock me into next week, these crazy mofos make Bangkok drivers look like grannies on a Sunday afternoon drive!

Walking into the old quarter there is SO much to see it’ll give you neck ache. From chickens in cages strapped to the back of mopeds, to men literally running up to tourists and glueing their broken shoes, to street traders decorating you with pineapple so you’re encouraged to buy something. Their sales techniques could do with some honing but it really is amazing to take in.

We stayed at Hanoi Central Backpackers – can’t recommend these guys enough! They were friendly, helpful and know how to throw a party. The rooms were clean, there were free breakfast and a rooftop bar – what else could you possibly want from a hostel? 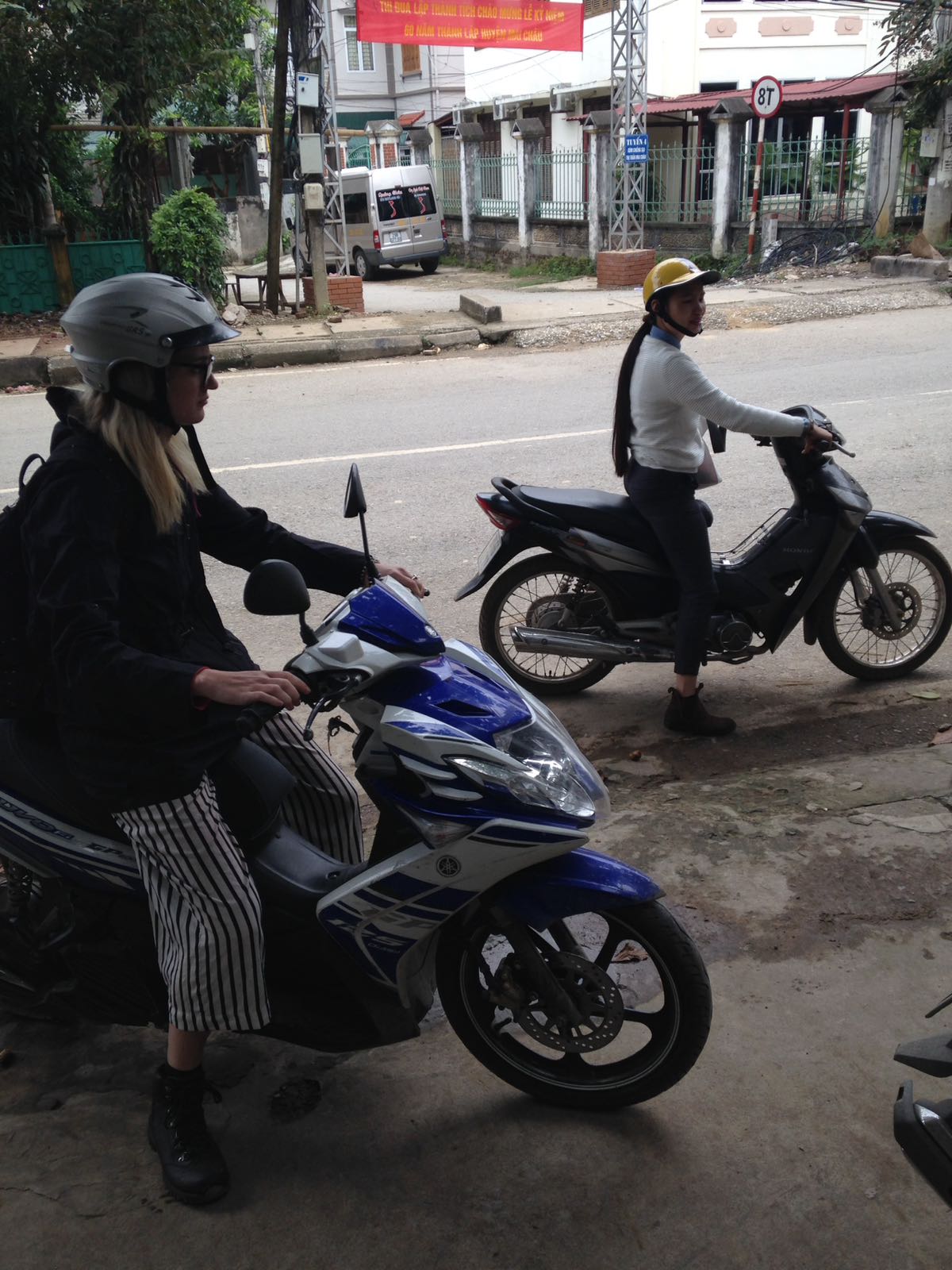 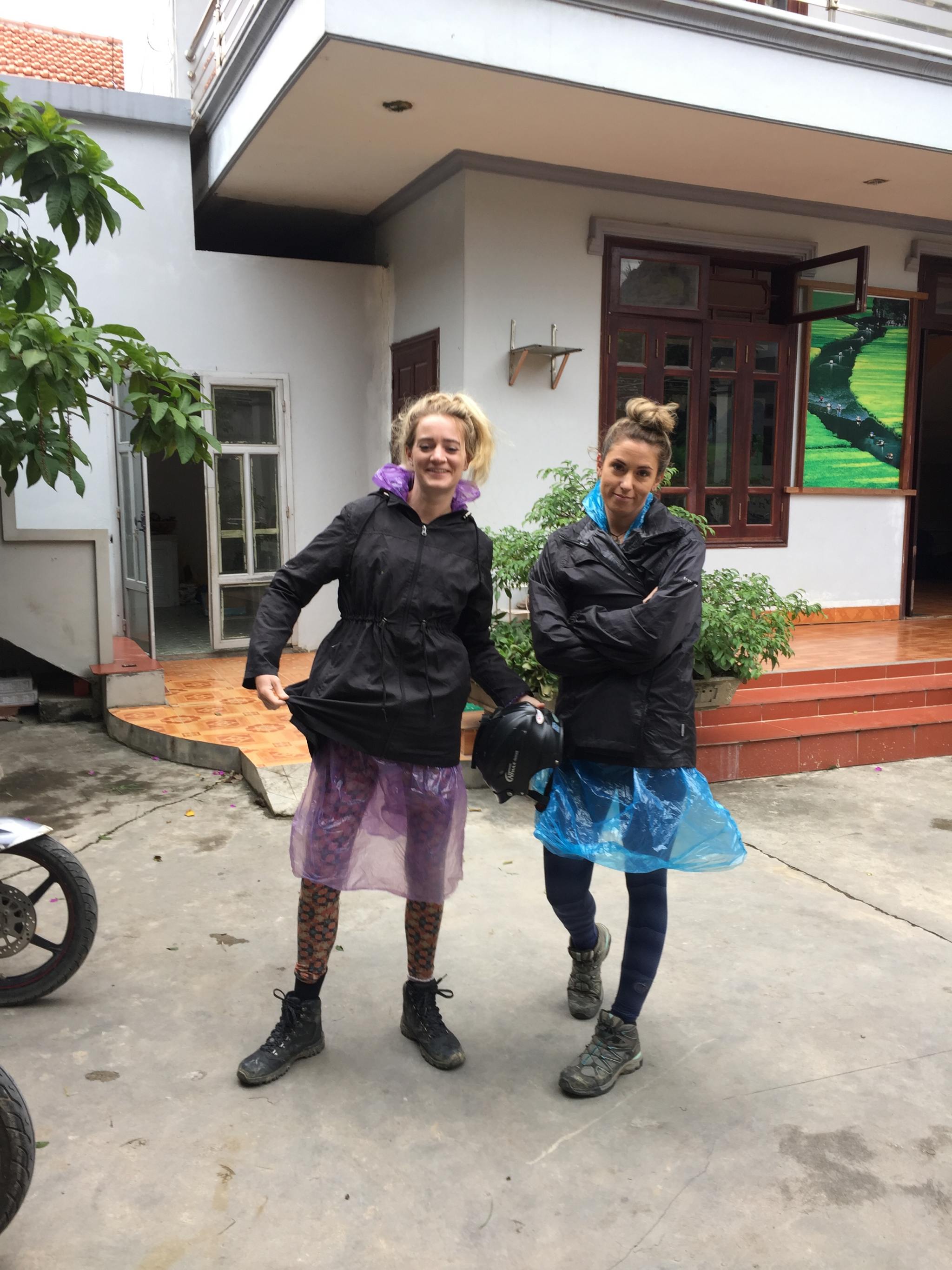 We may have over-funned ourselves the evening previous and managed to sleep through breakfast so finding a good lunch option was a must. We found a make your own mini BBQ hot pot for £6 each including a beer. BARGAIN! You put the meat and veggies on and cook it on your very own raqlette, aside from the obvious fire hazard it was delicious and so much fun (I even managed to get Dem to try calamari?!).

On recommendation from Eman and Megan, we headed to beer corner for 20p beers and consequentially didn’t make it to dinner with three people throwing up, two of which in the actual bar. Note to self: just because the beer costs 20p you don’t need to drink 10 pints of it!!

We went to find mopeds to travel to Sapa – our hostel as lovely as they were, tried to offer us ones without wing mirrors. I don’t know whether they’d been knocked off or whether they just don’t come as standard out here but no, just no.

We took the mopeds from Hanoi to Sapa with a few stops offs on the way. First up was Mai Chau, google maps said 2.5 hours – EASY. It lied, Google lied to us. Midway into our journey to Mai Chau we stopped for food. There is no hint of a menu, nobody speaks English and we just sat down crossed our fingers and waited to see what would appear. The food is good but there is definitely something unnerving about smashing through a bowl of mystery meat, and trust me Google translate doesn’t always have your back!! 5 hours later, it’s dark, Tony’s moped has run out of petrol half way up a mountain and we were so tired from driving that we made an executive decision to check in somewhere for the night.

We ended up staying in the weirdest hotel that looked like something out of the never-ending story – except with stewed animals in jars and an empty festival opposite.. I honestly felt as if I was in a weird trippy dream. Dem and Tony were getting their pictures taken, the Pho tasted like watery fairy liquid and don’t even get me started on the four weird beds all facing the TV like a budget version of Snow White and the seven dwarfs. It’s the first time since being travelling that I actually freaked myself out enough to send a pin drop of my location to my mother in case I got abducted in the night.

I feel like I need to rewind to the bit when I raved about the road markings earlier on. There may be road markings, but with over 4 million mopeds in Hanoi, 3 million of those don’t use their indicators or mirrors (maybe that’s why our hostel reckoned we wouldn’t need them!) and boy do they love a horn! When we finally reached Mai Chau we checked into a homestay where the hosts got us to catch our own fish for dinner (two fish FYI – just call me Bear Grylls). Was a great evening but I couldn’t quite get my head around the authenticity of being in a small village in the middle of nowhere with wifi!

In no time at all, we were on the move again. As a non-driver I spend most of my journey wondering why they don’t sell snacks at petrol stations. It genuinely upsets me – someone could make a killing out here! Aside from snack watch, I was tasked with navigation. After 3+ hours I realised this was possibly the most boring task in the world. So plugging in my headphones and whacking on Google maps audio I could sit back and belt out the best of JB remixed with a few directions.

On arrival in Sapa, it is freezing and I’m blown away with how much it reminds me of France in ski season! Obviously, we’ve packed well for our Sapa trip with shorts vests and dresses which of course remained firmly folded at the bottom of our backpacks. With all our warm clothes on (one top, one shirt, a jumper, a Thorpe park poncho, a raincoat and unmatching trousers) I don’t think I’ve ever looked or felt more like a colour blind lesbian in my entire life). 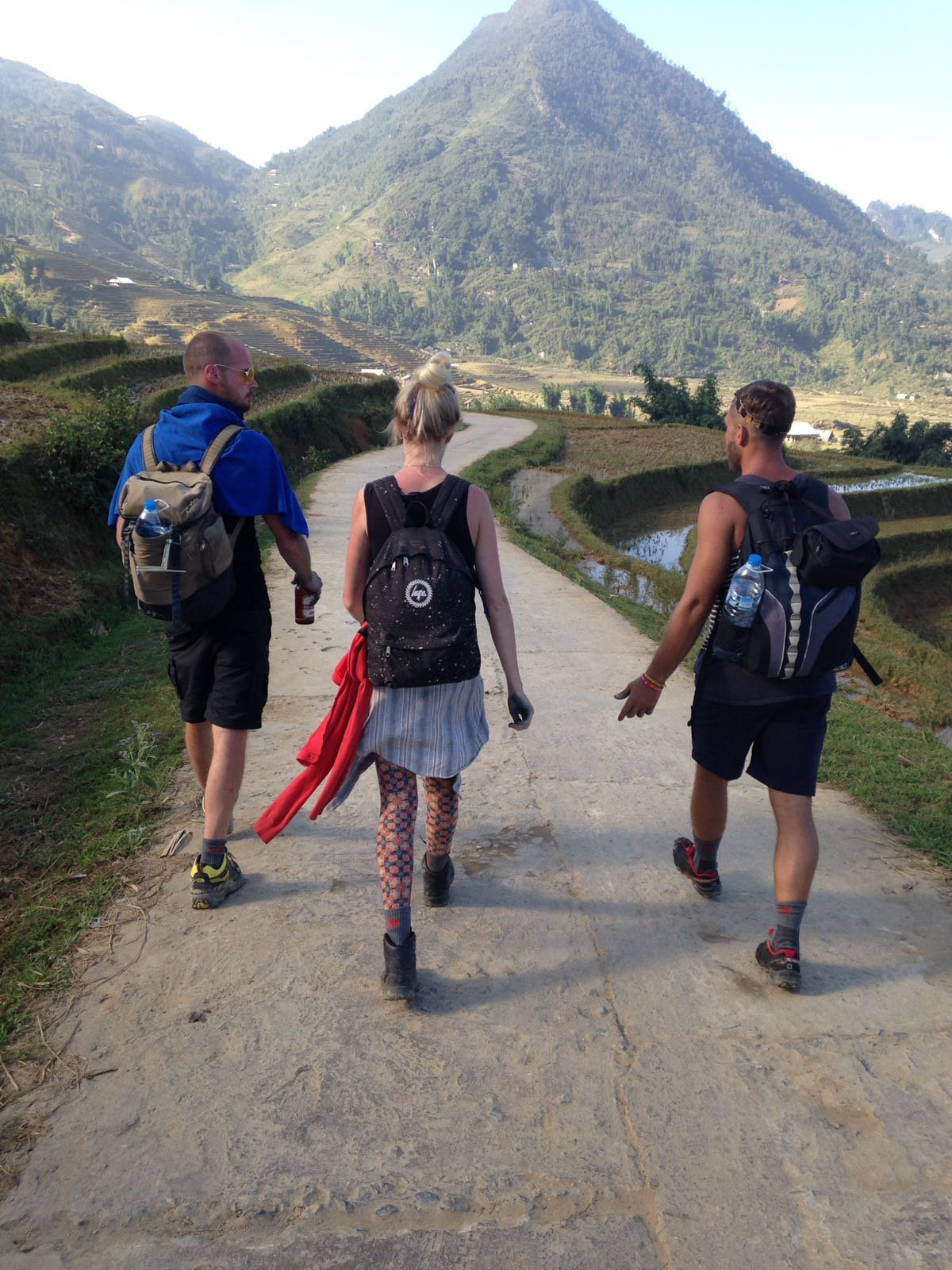 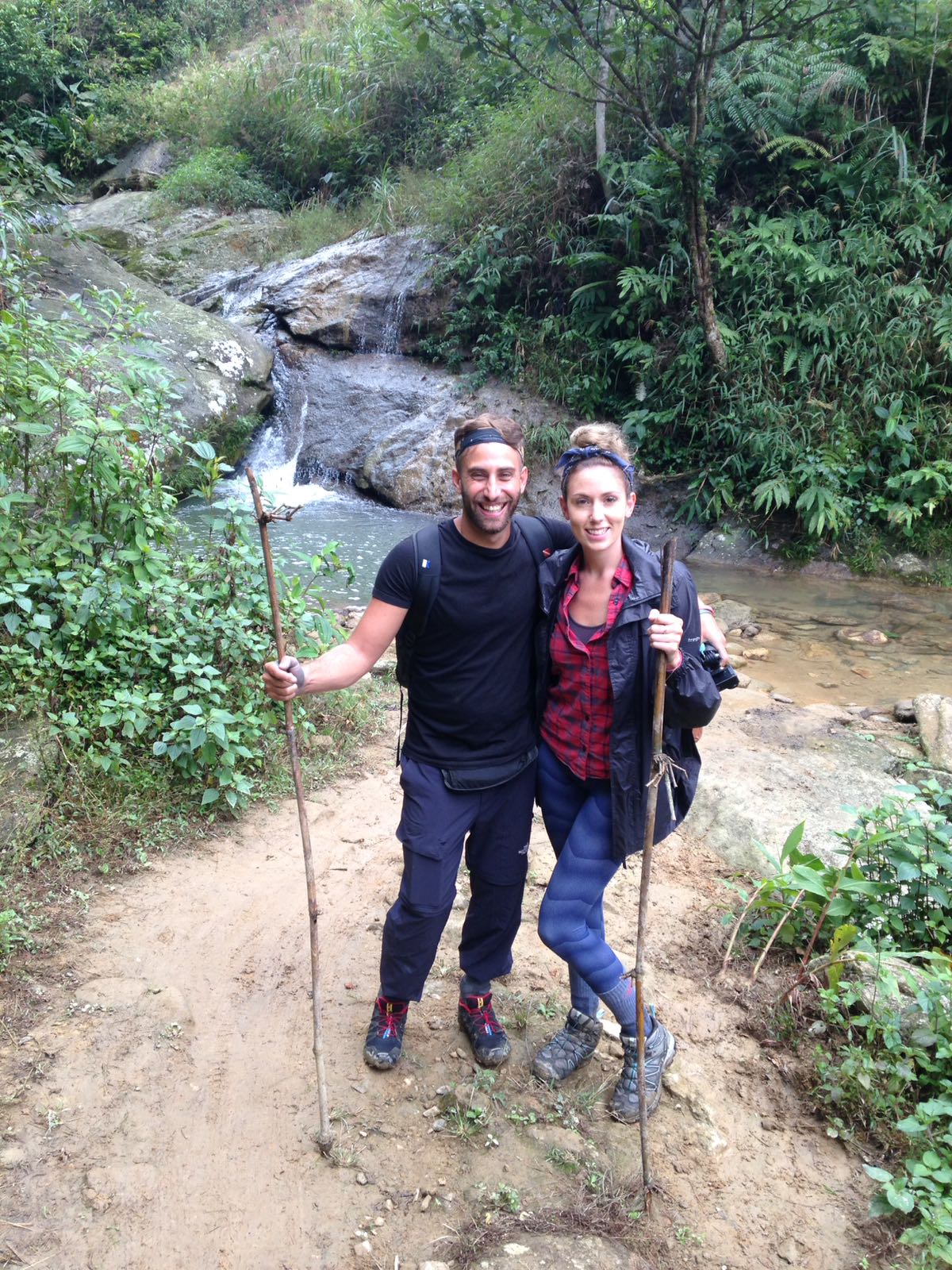 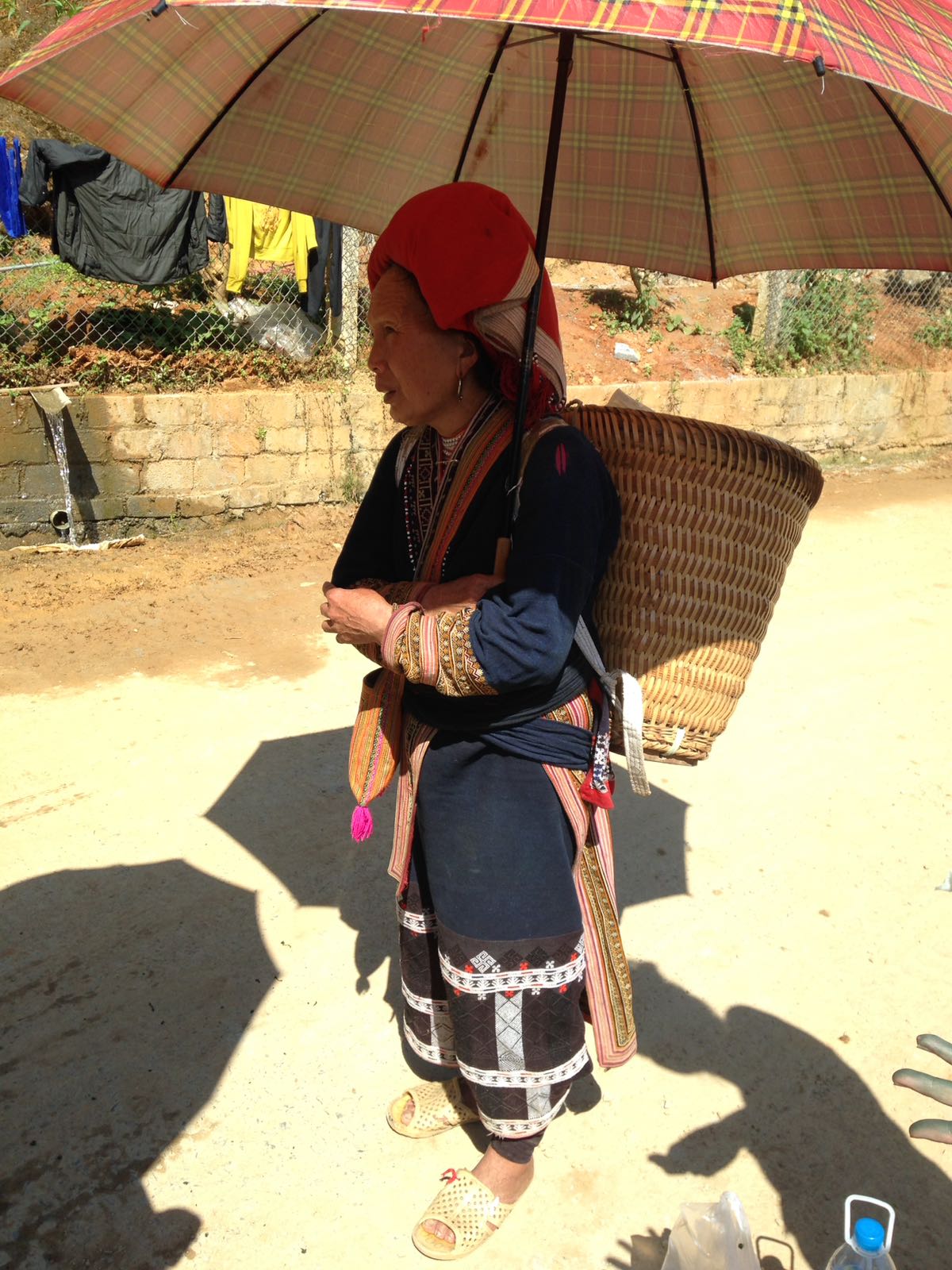 Once we had adapted to our homeless looking attire we opted for a two-day trek and homestay, and I can honestly say it was the most amazing two days. I hadn’t been too culturally shocked in my 6 weeks out here, yes the roads had been consistently bad and there hadn’t been a Topshop on every corner but you can get wifi and a beer at every turn. So we were desperate to see the real Vietnam.

On our trek, we were taken through rice paddies and into the mountains by the Red Dao tribe. Our guide showed us the rice fields where each family grows their own crops as well as talking us through how she had come to be a guide in the first place. She spoke amazing English as well as three other languages, putting my basic conversational French to shame. Before becoming an official guide she used to sell handicraft (bags/bracelets/clothes etc) to tourists and learnt English in the evenings to obtain her licence to be a guide. In previous years she had to cut off her long hair in order to be able to feed her baby which made me shudder at the number of hair extensions I’ve worn in my 28 years!

The stories we were told regarding unhappy arranged marriages, abortions and poverty without an ounce of contempt or complaint honestly made my heart ache and realise how much we take for granted.

Sleeping in the mountains

We were invited into our hosts home which was at the top of the mountain surrounded by rolling hills and beautiful scenery (no Netflix here ya’ll). They had two strip lights, one in each room and all the food was cooked over a roaring fire on the ground and served up to us on a low wooden table.

I worried at first that the host may feel a little pessimistic at having a whole host of western travellers sitting at her dinner table taking selfies and marvelling over the views but I couldn’t have been more wrong. We were encouraged to talk with the tribe, help them better their conversational English and in return, they answered our questions and made us feel right at home.

After dinner, we were given happy water or rice wine as it’s known in Northern Vietnam. How can I best explain how this tastes? Mud flavoured rocket bloody fuel. Shots were poured consistently throughout dinner and every single one burned down my throat like liquid nitrogen!

Heading off down the mountain en route back to Sapa, we made a quick toilet stop. I’m fully up for new experiences but some things you just don’t ever need to experience… For example, a toilet stop next to a pig pen. Have you ever tried to use a squatty botty potty while a pig watches? Practically impossible. Couldn’t do it. I’ll hold it thanks. 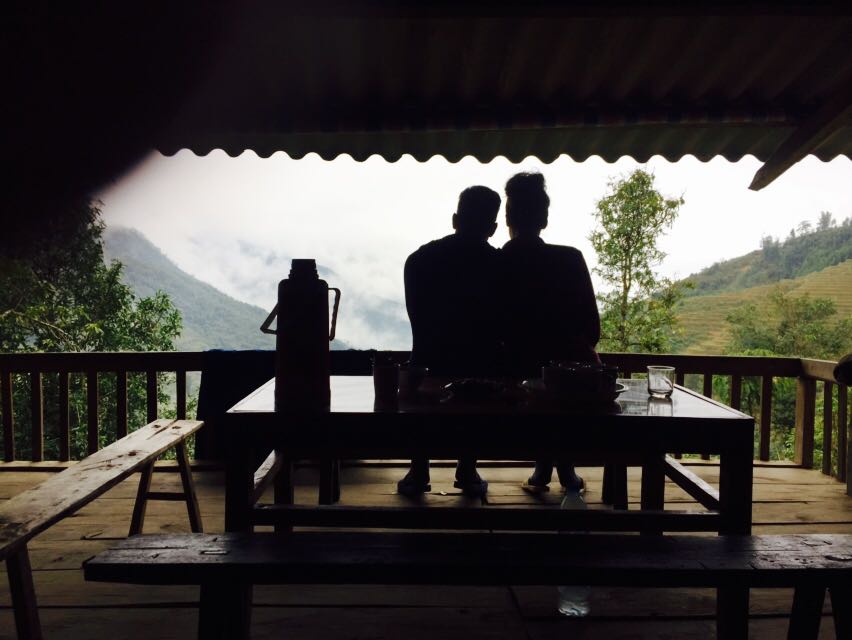 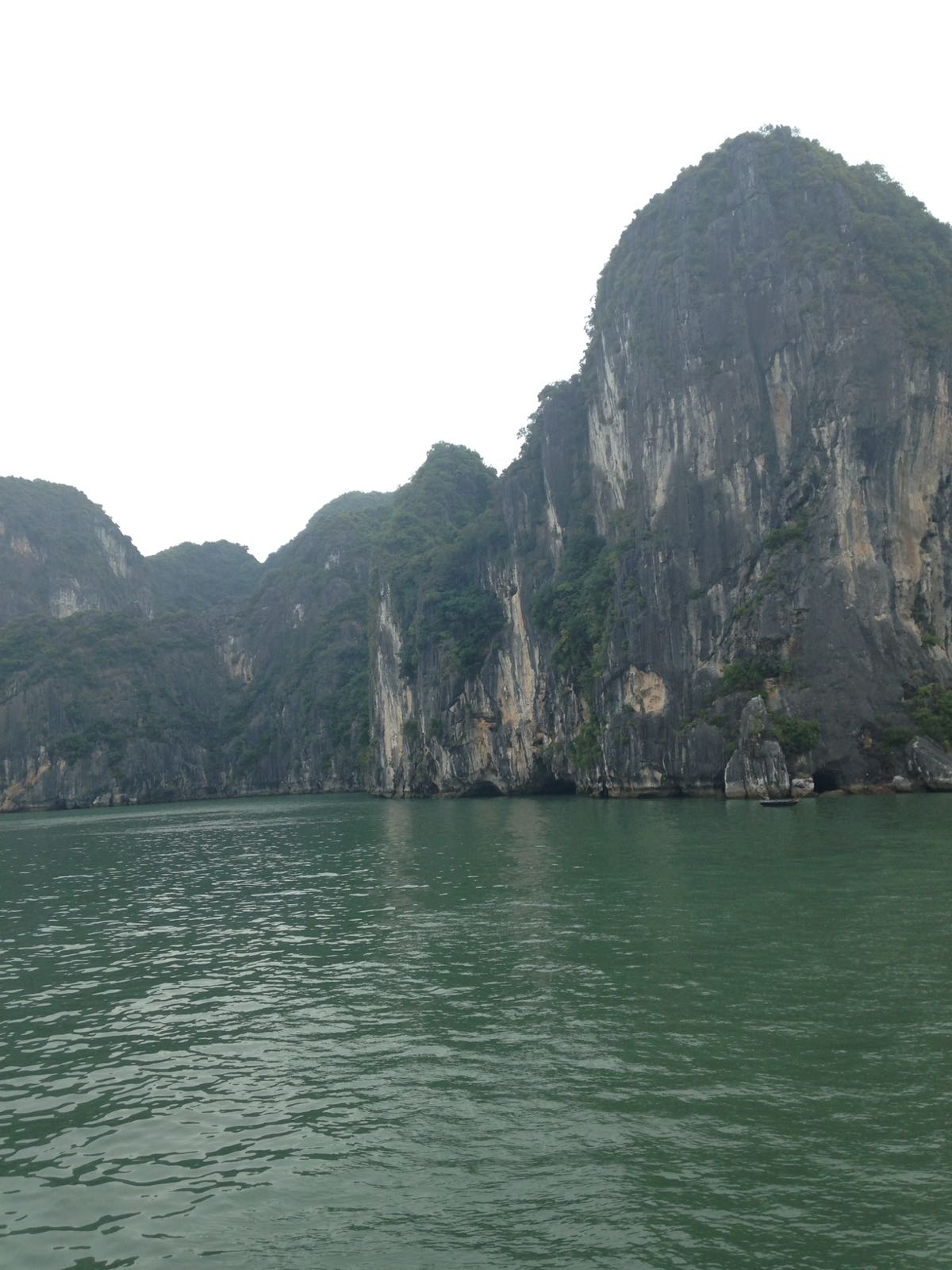 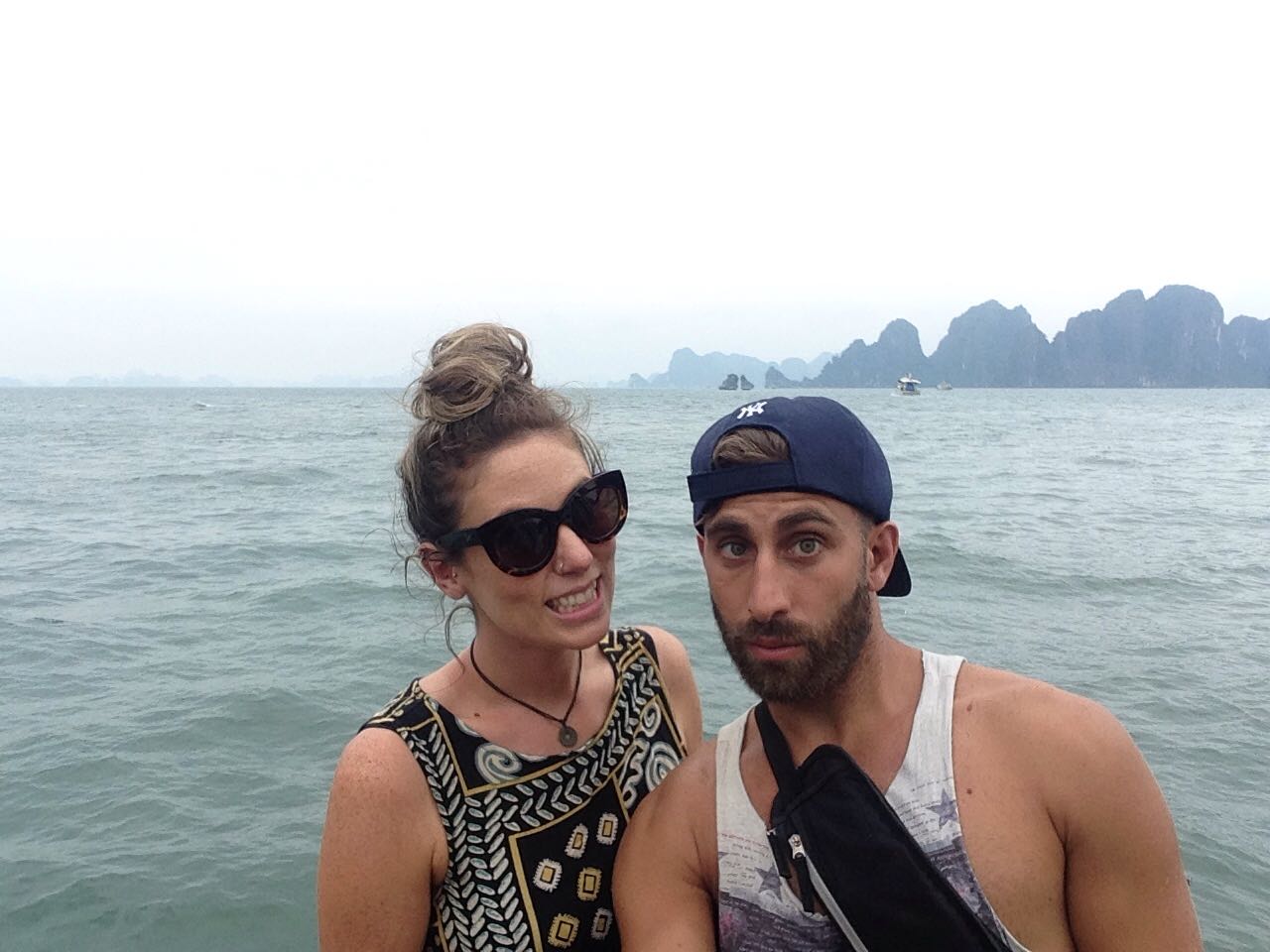 We decided against Castaway as we were out boozed from Hanoi but wanted to go and see Halong Bay. We went from booze cruise to snooze cruise real quick.

We were ushered onto the bus at 8:30 am and drove for 5 hours with a stop in the middle at a shopping centre crammed with tourists that we didn’t really want to go to. With the early start and unwanted stop off, we were already feeling a little cranky. On arrival at the bay, the sunshine that we’d been hoping for didn’t prevail.

Food was served as soon as we set foot on the boat, and separated based on whether we’d picked meat or fish. Driving up to the bay we were slightly underwhelmed – first thoughts – dirty, quite unorganised, lots of shepherding around and a hell’a lot of waiting around.

Getting our cardio on, we kayaked our way around the bay and into the caves. If you don’t fancy a Kayak you can jump into a bamboo boat. But god forbid if a kayak peasant strays too closely towards their little boat of dreams, the women rowing the boats are AGGRESSIVE AF! After being swatted a few times with the oars we’d had enough. There’s only a small area you’re allowed to Kayak in and you’re given a 40 min window so our idea of kayaking back to Hanoi was dashed fairly quickly.

After seeing Halong bay we were taken to the Sung Sot cave, which was beautiful but I was kind of disenthused by the lights everywhere, man-made steps, security cameras and a desk with a laptop set up in the corner.

Halong Bay was something we wanted to do, but would we do it again? Probably not.

For all our clever planning of a nice early night and lie in you can already guess that didn’t happen. Hanoi shuts down early (around 1 am) so instead of heading home we followed our friend Johan who assured us he was the man with a plan. Wandering down a deserted road we were wondering where was going to be open at this time when he knocked on a shutter and there is a ROAR of noise.

Where else would you go when everything is closed but a restaurant lock-in? & when they have no room upstairs what would they do with you but set you up with a table in their living room with a shed load of beers and vodka?!

Tired and dozy with little to no sleep the night previous, the arrival of our first sleeper bus to Ninh Binh was like a modern-day knight in shining armour…