Laos was next on our hit list and I feel like there’s something I need to get off my chest… I thought Laos was in Thailand. I know I haven’t really considered Geography since I scraped my GCSE but I really should have known that Laos is its own country, I mean HOW embarrassing. Moving swiftly on.

We quickly stopped off in Chiang Kong on route to Laos when Dem walks into a chemist and asks for a plug converter – after being offered ear plugs and Imodium we figured we were in the wrong place! Picking up our pals we headed for the 6-hour slow boat. I have to admit I was kind of expecting a sun-seekeresque boat, room to sunbathe, a few stops offs and snacks galore. In reality, we had beautiful scenery, 5 bottles of whiskey, coach seats, one toilet a tinny speaker and a sore bum by the end of it!

Docking in Pakbeng we stayed for one night in the smallest village we’ve visited yet. Three restaurants, one bar and three little street stalls meant my desperate requests for directions to 7eleven fell on deaf ears. Have you ever had the perils of trying to mime what a tampon is to a confused looking old Laos man? No, well I wouldn’t wish it on my worst enemy! In Pakbeng we were told to double lock our doors as it’s been known for people to be robbed in the middle of the night, which filled us with confidence! & sure enough, one guy woke up with his door open and his expensive camera gone…

First impressions of Laos – dry heat (still not used to it) the locals don’t seem as friendly as in Thailand and everything is more expensive. Add to this the lack of sleep due to no air con in our guesthouse and being stuck on a boat for two days being a pirate… ARRRRR! 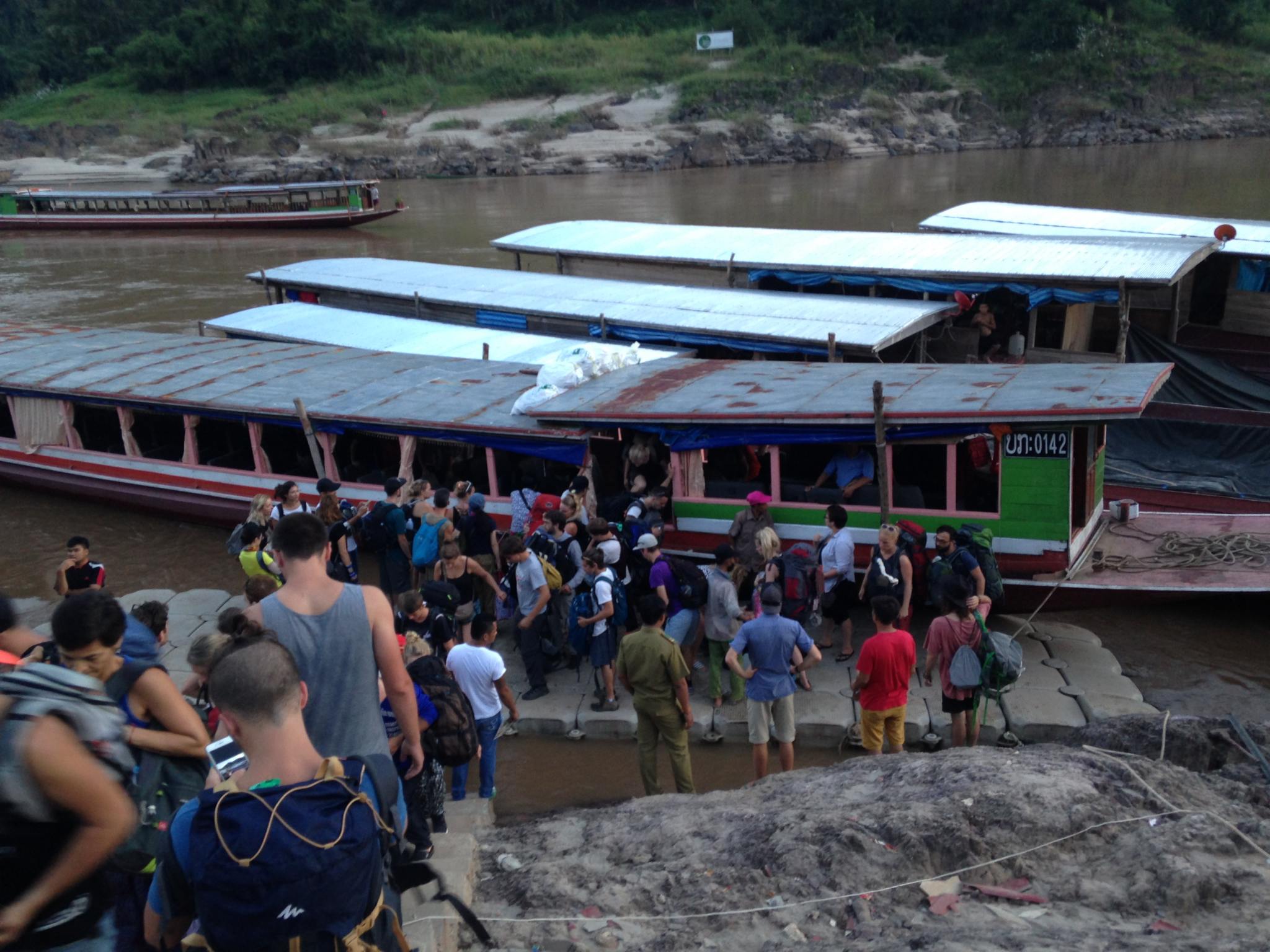 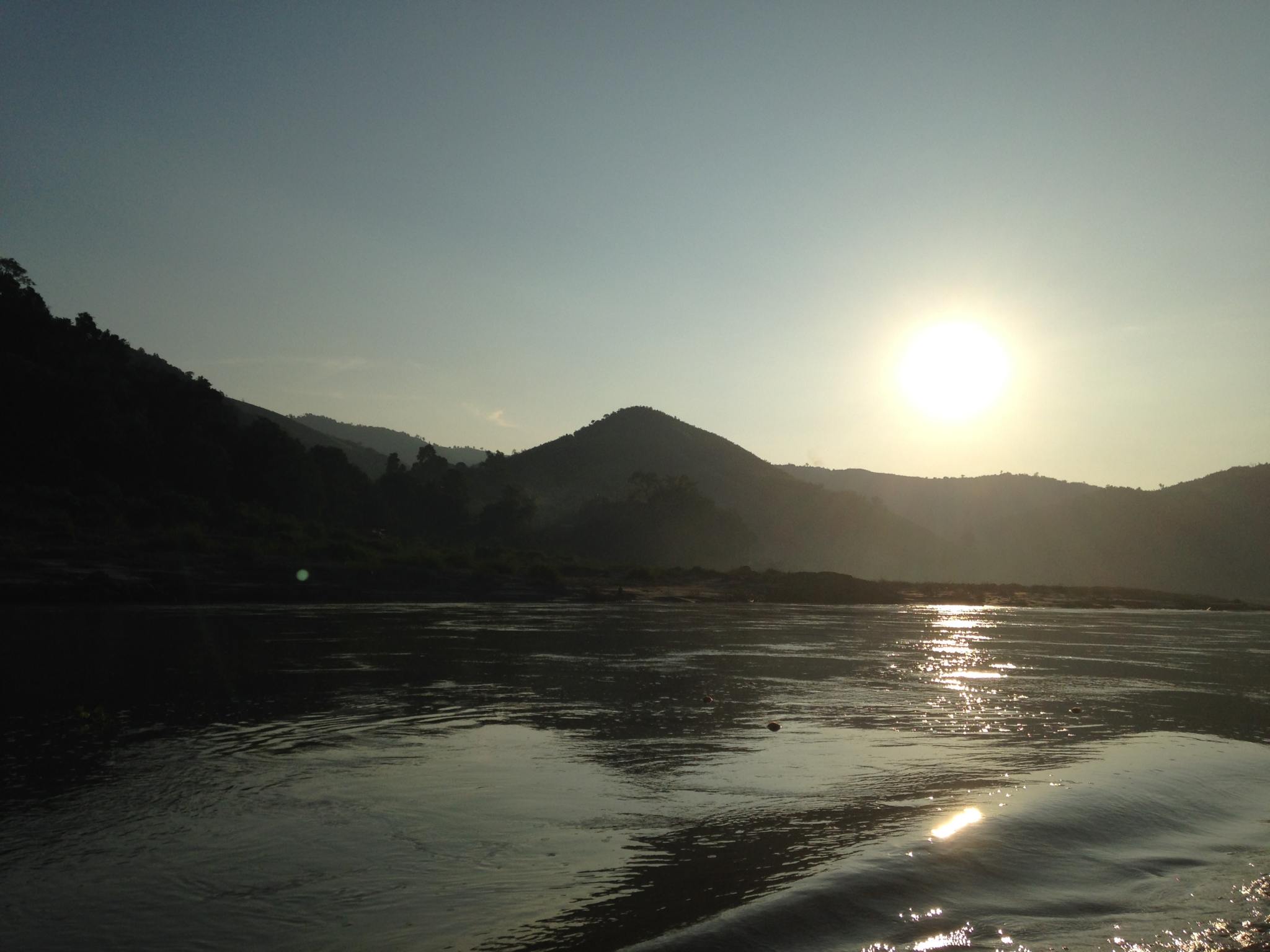 On our first night, Dem uses the bathroom in the night, misplaces the toilet and hits his nose smack bang off the washbasin = instant black eye. We then woke up bright and early for our first day of site-seeing, beginning with a trip to the ATM to withdraw money. Instead of giving us our money the machine spat out the card, flashed up “no connection”, swiped 2 million kips from our account (£200) but gave us no cash.. brill start!

We then go and hire a moped, Dem’s asking sensible questions like “where can you park, are there any restrictions etc” I’m just so busy staring at this woman’s eyebrows, they are a MASTERPIECE so obviously had to ask where she got them done! (You can take the girl out of London, but you can’t take the London out of the girl).

As you may have realised our fave way to explore a new place is by moped/motorbike… So, of course, we grabbed our fetching helmets and headed straight for Kuang Si Falls – which was top of our to-do list in Laos.. for a bloody reason, it is STUNNING! For all my initial whinging about Laos, it was all worth it to be able to experience a truly amazing waterfall which only cost us 20,000 kips each (about £2 each)! We hiked up to the top which took roughly 45 mins clambering up rocks and hanging onto trees like monkeys (more on this in the vlog – look away now mother) for the most beautiful view – 100% worth the climb!

In terms of nightlife Utopia bar has a chilled out vibe and is about 10 mins in a Tuk Tuk away from the centre of town, the only problem is it closes at 11:30 pm. So what else is there to do?! GO BOWLING!! Only bowling alley I’ve ever been to where a large bottle of whisky, mixer and bucket of ice is £5.50 and there are no real rules on gameplay = lots of people throwing balls in various directions and repeatedly falling over. It’s also the only bowling alley I’ve ever visited where there are no bowling shoes available but prepare to be offered weed, opium and ice- I mean do I look like Walter White?

We’ve experienced our fair share of power cuts since being in Laos. Coming home from a pool day to discover there is no chance of aircon, no lights to see what clothes you’re changing in to and definitely no chance of charging your phone has become pretty darn common. Forgetting the whole power-cut situation Dem walks into our hostel and tries to switch the light on…

Failing this he remembers his trusty torch (this has actually saved our bacon more than once) again it’s little things like this that REALLY help you out of tricky situations!

Heading out for dinner we snagged a buffet for all you can eat 10,000 kips (£1) for a plate & they heat it all up on the spot for you – £1 for pad thai, noodles, vegetables, papaya salad and more types of rice than you can shake a chopstick at. Can you imagine the joy on Demi’s face?!

After three days in Luang Prabang, we headed for Vang Vieng. I’m not going to mess about here, Laos is bloody expensive and we were smashing through our daily budget which was making it hard to enjoy our time here as much, as our money was disappearing faster than Kylie Jenner’s innocence! 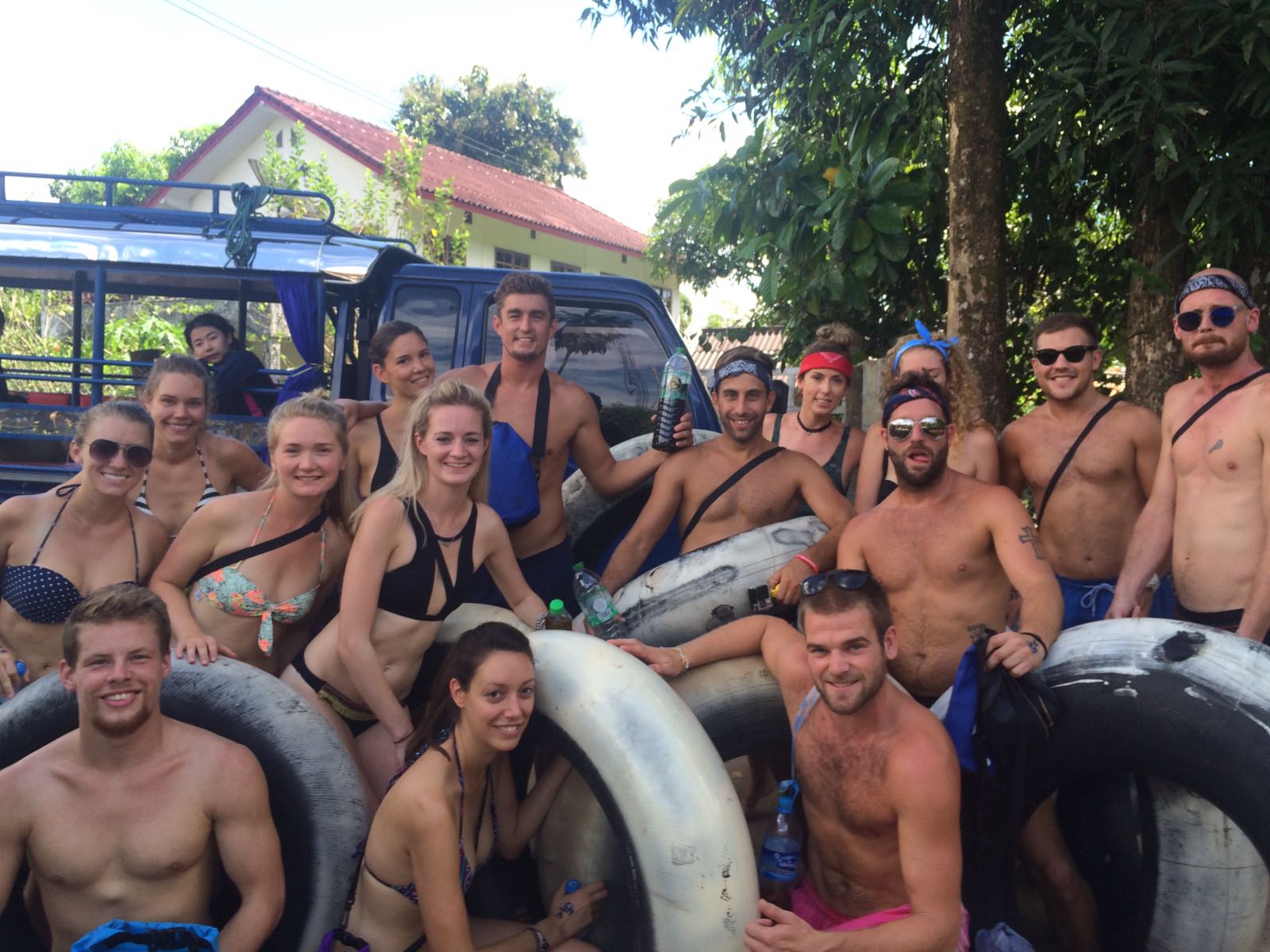 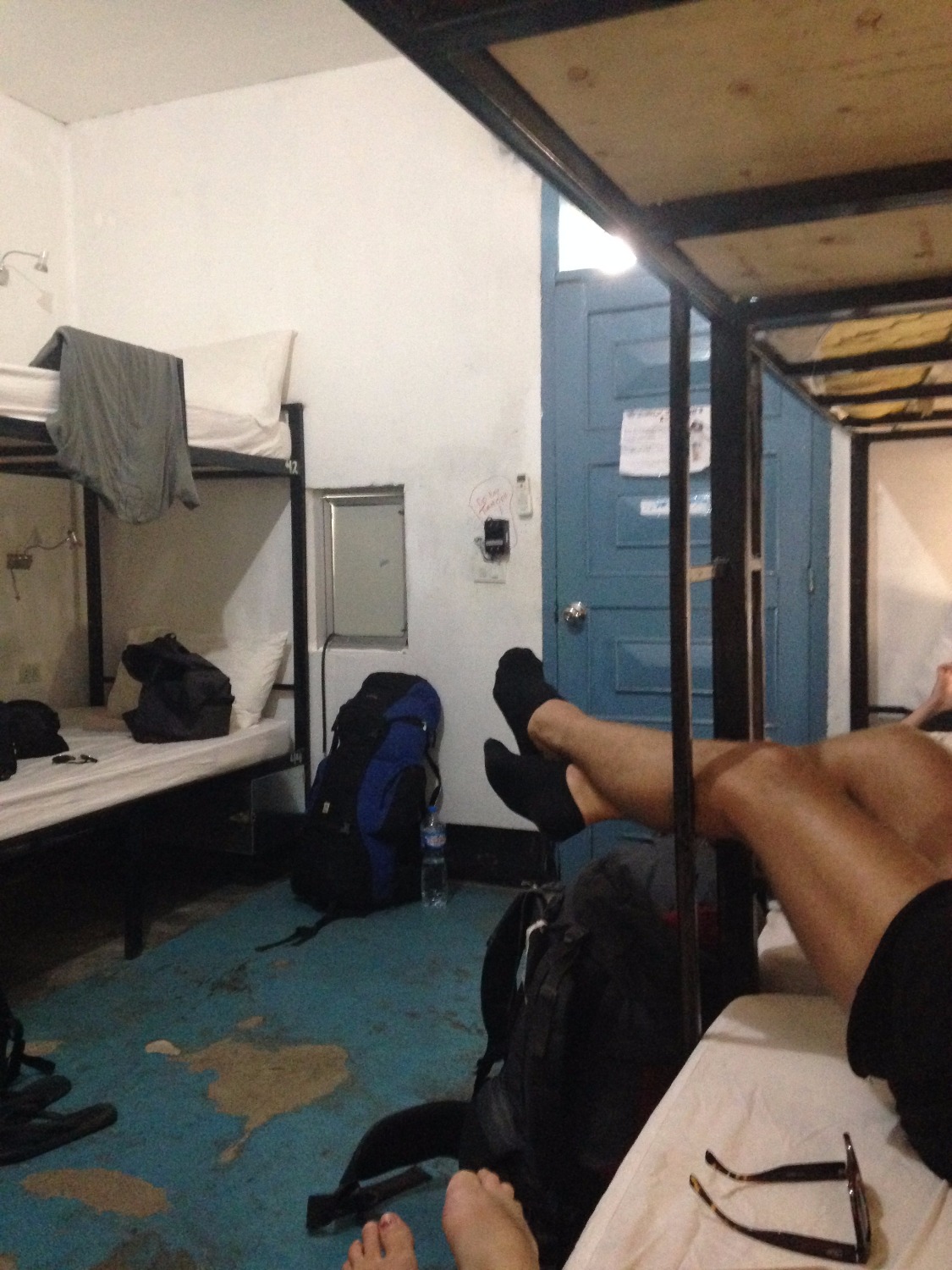 One of the main things we wanted to do whilst in Vang Vieng was tubing. Hundreds of people travelling down the Mekong on rubber rings on a bar crawl what could possibly go wrong? As there are only two bars left (there used to be 10 – but most of them closed as people kept dying – true story) we brought our own whisky along to keep us going. Add to this, a ridiculous amount of drinking games, balloons and stupidly strong cocktails. & surprisingly guess what can’t you do particularly well on this concoction? Swim. & what happens when you fall through the middle of your rubber ring? You need to be saved. But what a day! So much fun.

The bus out to Vientiene (3.5 hours) from Vang Vieng was honestly the most ridiculous thing. Every seat was taken so we were relegated to the back row (bumpiest seats in the house). To add insult to injury there were also additional seats added in the aisle to cram more people in. We also found out that 4 people died a week previously after being crushed to death on the exact same type of bus… JOY!

Once off the death bus, we arrived at our new 8-bed mixed dorm. I may have conquered the whole hostel vibe but this was a new one on me! Walking in and seeing 4 bunk-beds with small metal safes attached to each and a wall lamp IKEA would be ashamed of I almost choked on my own distasteful expression. But the plus is that we are sharing with friends and we only had to look at the poorly paved flooring for one night because in the morning we were flying out to VIETNAM!!!