Embarking on our third sleeper bus to Nha Trang we were looking forward to our little cosy cabins on wheels. Our experiences on the sleeper buses so far had been pretty good. This bus, however, had no hooks to hang anything and a broken toilet. 12-hour trip and no toilet?!

But they assured us they’d stop along the way to let us use the toilet. What they didn’t let us know was that they’d just be stopping by the side of the road so we could squat in someone’s garden. After narrowly avoiding peeing on my new birks & getting our asses molested by ants we clambered back onto the bus slightly nonplussed at the “VIP” sticker staring at us from the side of our bus.

We’d heard mixed reviews on Nha Trang so only planned a day there, with rumours of the sea being dirty and the city being overrun with rude Russians, but I can’t say we experienced that personally. Demi was determined to get to the water park. I, on the other hand, was desperate to sunbathe and be freely offered drinks, snacks and books every hour on the hour. Luckily enough we were travelling in a big enough group to make our dreams an eventuality! Nha Trang felt like we were in a beach resort on the Costa del Sol, everyone was sporting sunburn, the girls in their tiniest bikinis, the guys rocking budgie smugglers and a slight overhang.

The sun was shining, the sunbeds were comfy enough to nap on and the drinks were free flowing so much so, it was easy to forget we were travelling at all! 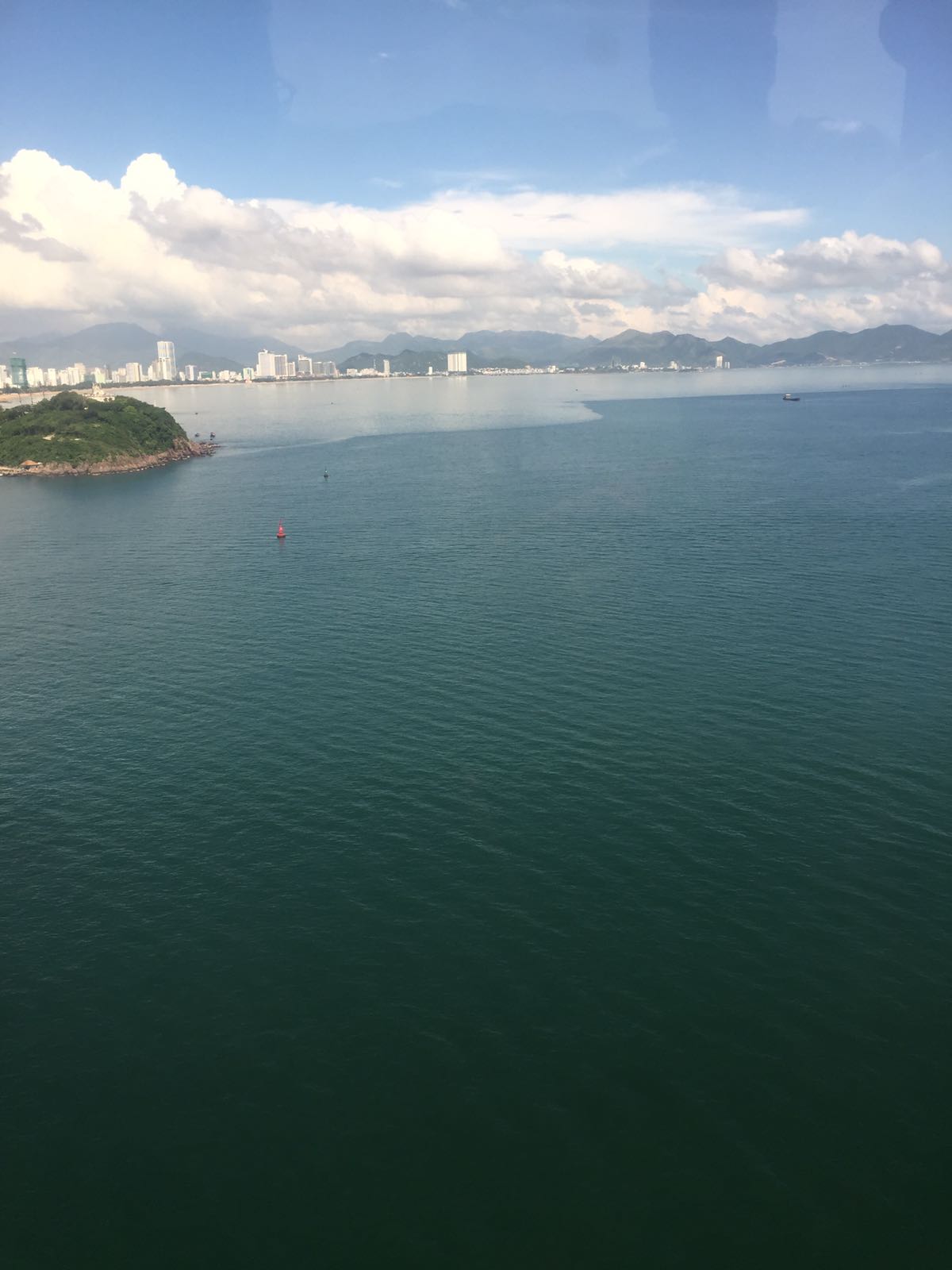 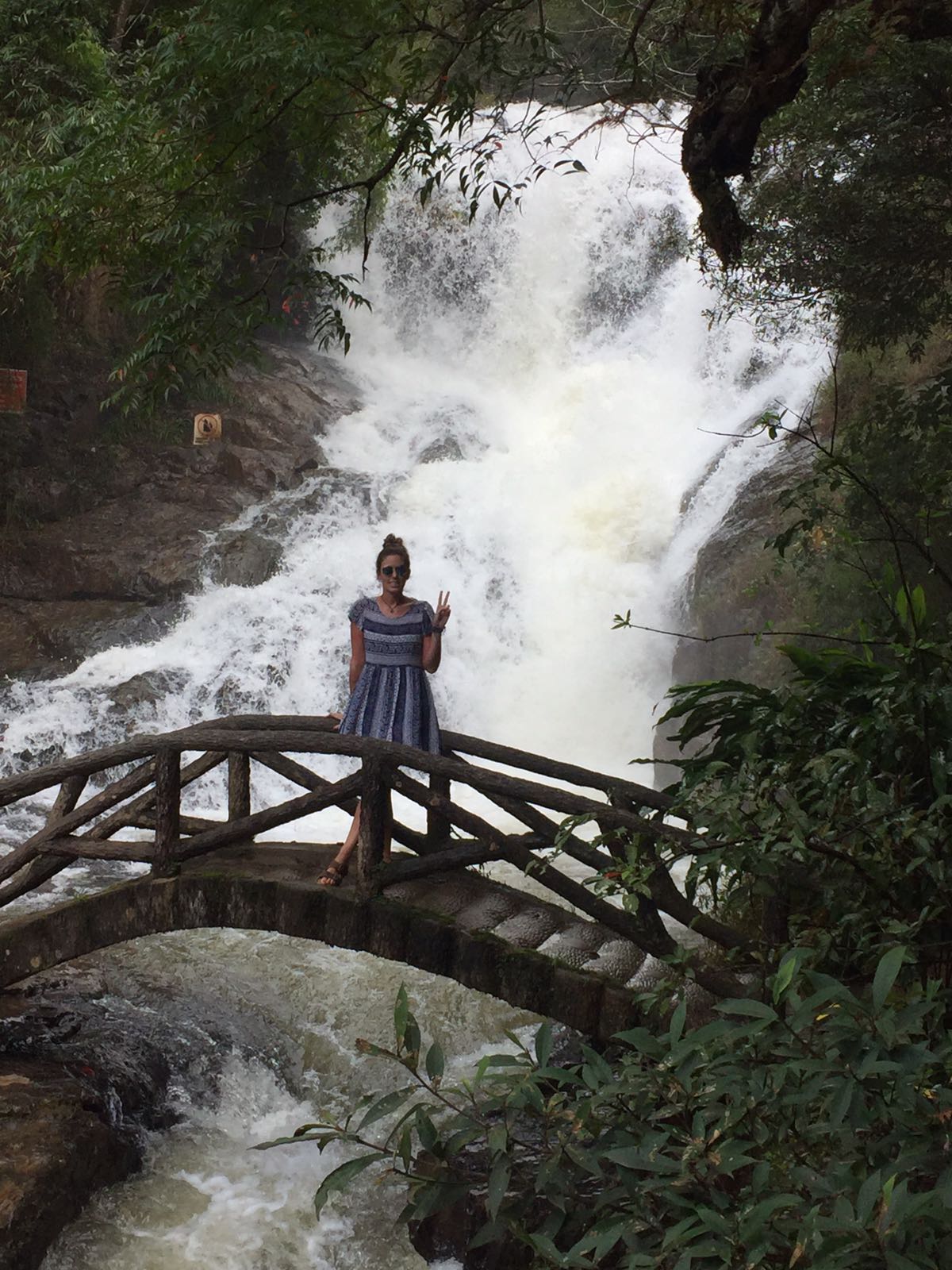 We rocked up at our hostel in the pouring rain. I was slightly non-plussed to go from blazing sunshine to torrential rain carrying with me a substantial hangover.. but our hostel was well and truly prepared for us. Dalat family hostel were perfectly equipped to deal with the needy state we were in and boy did they soothe our hangovers. We were given hugs, a welcome drink and were immediately sat down for a traditional Vietnamese family dinner with everyone from the hostel. It honestly felt like you were having dinner at your crazy aunties house.. But in a good way!

We had planned a day exploring the waterfalls of Dalat with our little travelling family but due to the dicey weather, having to swap mopeds three times due to various faults and nearly being swiped off the road by an oncoming car, we decided to call it a day! We did, however, visit the Datanla waterfall which was close by and came with a toboggan ride. As I’d missed out on the water-park I decided to make full use of my lungs on this one and screamed the entire way around, much to the displeasure of the ride operators repeatedly telling us to slow down!

Top of our Dalat hit list was Maze bar. As soon as you enter you don’t know which way is up and which is down, and it’s practically impossible not to get lost. Coupled with a few G&Ts and it’s a full evenings entertainment. We then headed off to Rain nightclub which is up there with the strangest places I’ve ever been for. Picture the scene, men walking around in suits, ladies dressed up to the nines, no-one on the dance floor, bored looking podium dancers, strobe lighting, oh and a bunch of very excited backpackers! It was certainly an experience!

After a fun-filled evening and a hurriedly ordered pizza for breakfast (who orders pizza to the hostel? – we do), we were ready to head into some sunshine again. It’s crazy how you can drive from somewhere that feels like autumn in London to spring break in Miami in the space of 5 hours. Arriving in Mui Ne, boy were we glad to ditch our layers and see the beach again. We found an infinity pool overlooking the sea, it was like all of the cold and rain we had endured was worth it just for this!

Picking our dinner of fresh crab from an array of tanks in a local seafood restaurant, we were blown away with the selection of fresh fish (if not slightly shocked by the turtle and snake hot pots?!). It was also nice to see the bamboo fishing boats all lined up after a day of fishing. I would have like to have a go but as you have to stand up to fish (the boats are circular) Dem quickly reminded me of my ongoing co-ordination issues, so I ditched that idea sharpish! 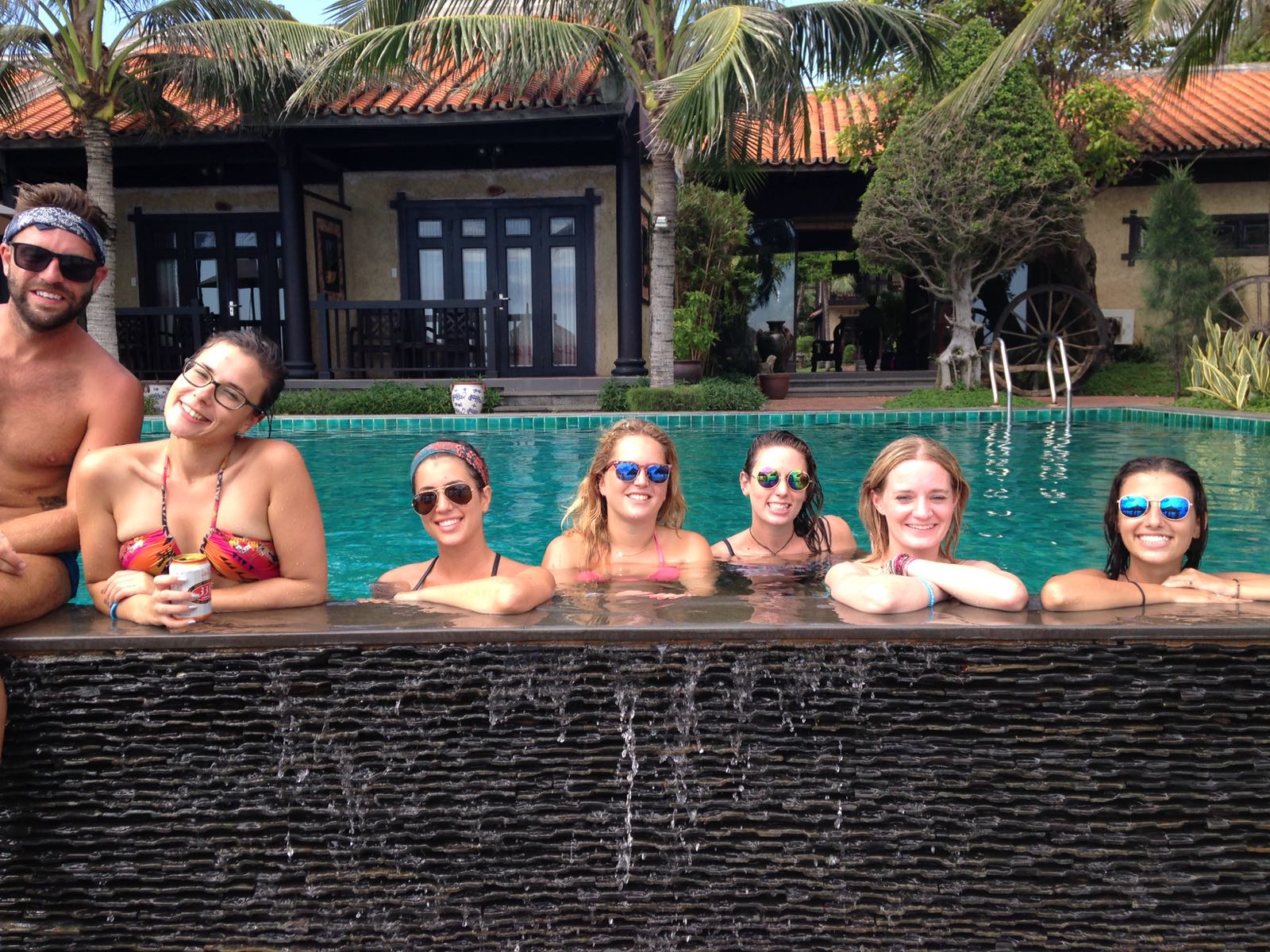 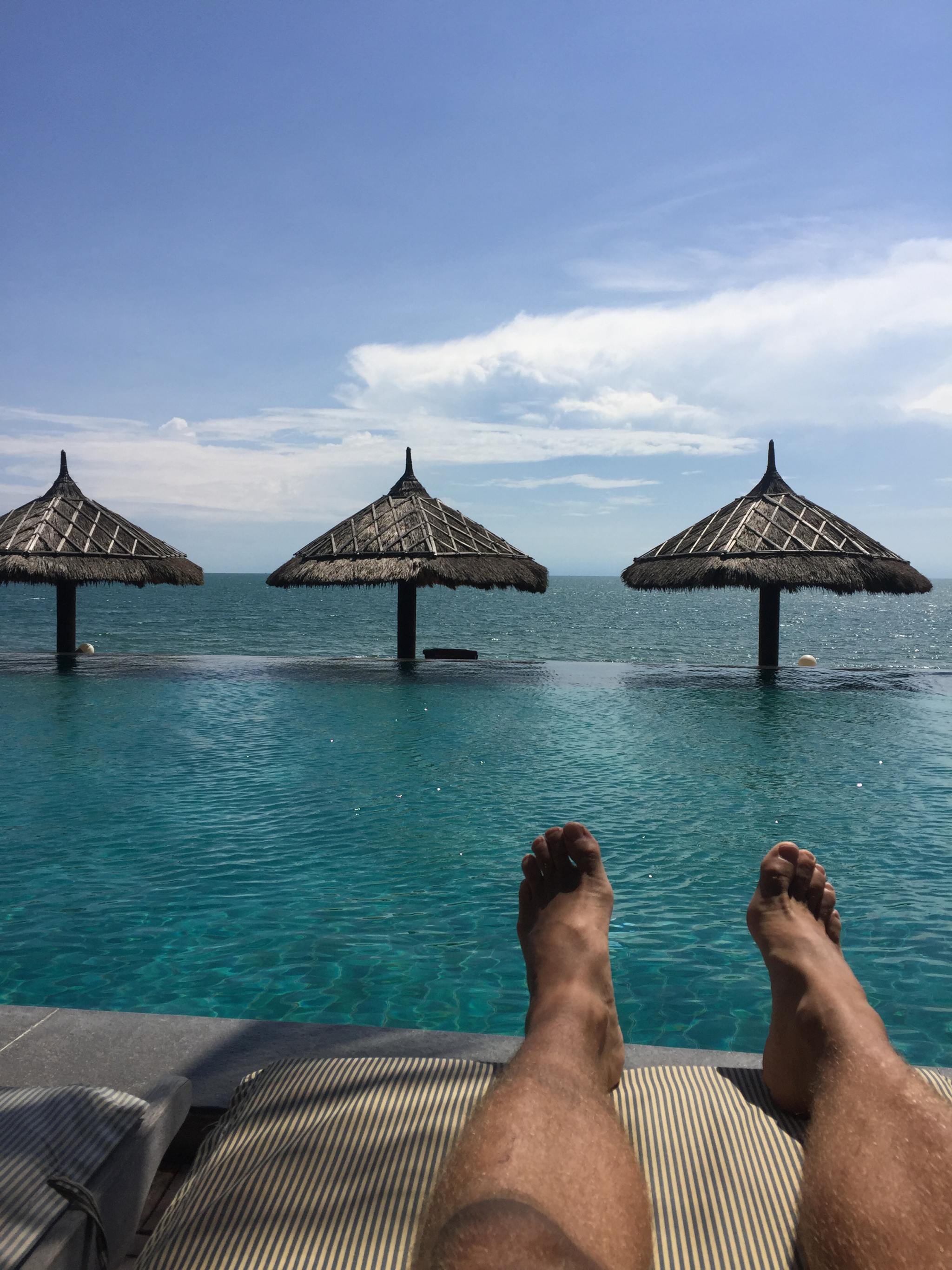 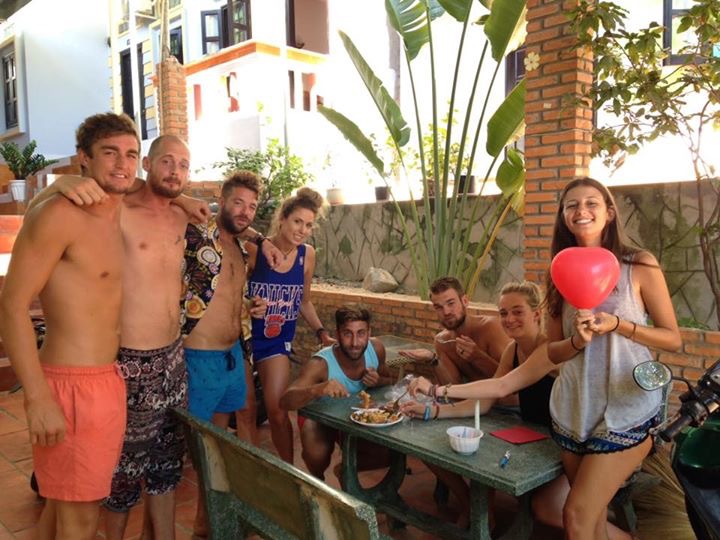 Dem’s birthday fell whilst we were in Mui Ne. He was awake at 7:30 am, like a child on Christmas Day. But as the gang were busy sourcing a birthday breakfast burrito and prezzies I knew I had to keep him contained until at least 9:30 which is no easy task when the sun is shining and there’s a beach on your doorstep. We then headed for a pool day which was not dissimilar to a secondary school pool party (minus the jager) which included me having to save a certain someone from drowning in the jacuzzi (in about 5 inches of water – we’re even for tubing now pal!)

After a full on day in the sun, we were missing some home comforts so we decided to make a family macaroni cheese. With the help of Google translate and purchasing flour from a local restaurant our cheesy creation took shape. Even though we were staying in an apartment with kitchenette our cooker wouldn’t work which meant Dem had to source another kitchen. The owners let us use theirs, what we didn’t let us know is that it would be inside their house and that we would have a whole host of small children doing their homework watching our every move..

Our next and final stop in Vietnam was Ho Chi Min City. Coming from a small beach town we were blown away by the craziness of the Capital. If we thought Hanoi was crazy, it didn’t have a thing on Ho Chi Min. Mopeds filled up the roads and pavements leaving us playing chicken with amused locals.

Arriving at 6pm we did as any sane person would do and headed for a pool party in a beautiful five star hotel overlooking the city, I’m not entirely sure the guests staying at the hotel had bargained for a whole host of overexcited travellers falling out of the lift into the foyer in their swimwear at 10 pm but they seemed to look amused!

Trundling home from the pool party, swiping the moustache of melted foundation off my top lip, clumsy drunk and looking like a solid 4/10 I suddenly remembered what we’d spotted earlier that day. The holy grail. The one, the only… ZARA in Ho Chi Min City!! So the fact I had to drag Demi by one foot into bed that night, fully clothed and attempting to hold onto the door frame didn’t even phase me! Tomorrow this girl was going shopping!

We’d booked a bus for Cambodia for the evening of the next day. Or so we thought… We were rudely awoken at 8 am with the hostel telling us we had to check out and our bus had been wrongly organised for early that afternoon. You guessed it, no time for a Zara trip! Cue a mad rush of checking out, rounding everyone up and sourcing somewhere to buy dollars.

Only to find out our bus had gone without us. We then had to jump in a cab James Bond style to chase down the bus. Which turned from James Bond high-speed chase to Mr Bean real quick with the taxi driving round in a circle before promptly getting a flat tyre. We caught the bus, eventually. Much to the disappointment to those who had got on the bus on time.

After saying a heartfelt goodbye to the majority of our amazing little travel crew, it was then time to head to the border and on to our next adventure… CAMBODIA 💖