From Hanoi we headed for Ninh Binh on our first sleeper bus. It was only a 4 hour ride but there is something comforting about snuggling up in your own personal pod with a blanket instead of sitting with your knees around your ears on a mini bus.

We looked around and being surrounded by the scent of carby snacks we instantly realised we had made an error with our snackless bags – rookie mistake!

Arriving in Ninh Binh it was COLD. Vietnam has way more chill than we bargained for! Layered up against the elements we headed for their biggest attraction, Tam Coc. Two hours of absolute serenity on a long boat where you are rowed through the caves.

Our guide rowed the whole way only using her feet making my best foot trick (picking something up with my toes) look quite frankly, a bit shit. The serenity was only disturbed once by Dem grabbing an Oar to speed up the process! The fetching rain mac was back out once again for our next activity, the MUA caves and the 500 steps up to the pagoda.

MUA cave and beyond

The cave itself wasn’t all that impressive but the views at the pagoda were definitely worth the climb. Layering up to climb up 500 steps I soon found was a mistake and the carefully arranged poncho and raincoat combo was soon abandoned. Sweating and with a few stops on route, we took in the views, oh my! Absolutely stunning. Rolling greenery and views across the whole of Vietnam, if it wasn’t for the rumbling of Demi’s stomach we could have sat there all day! 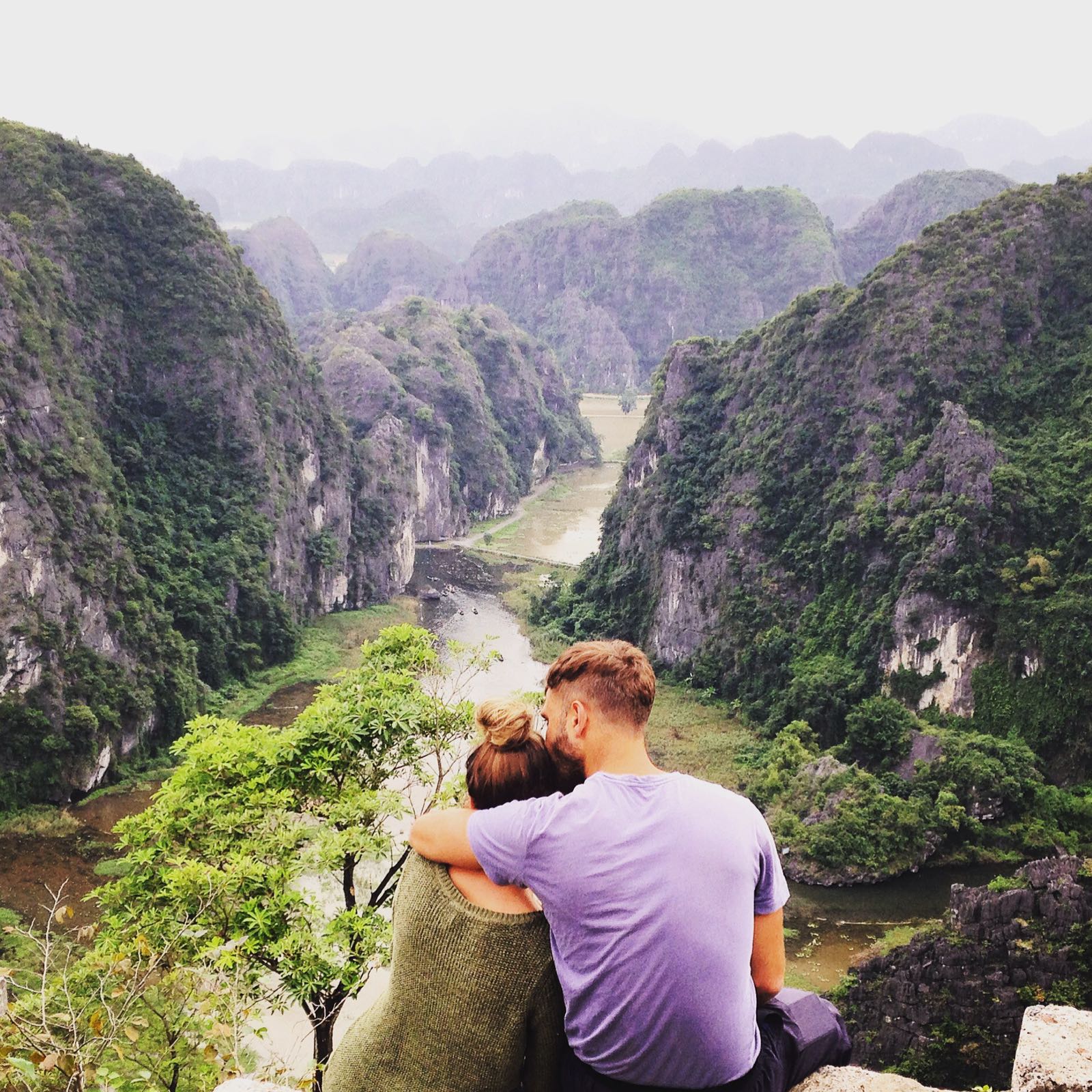 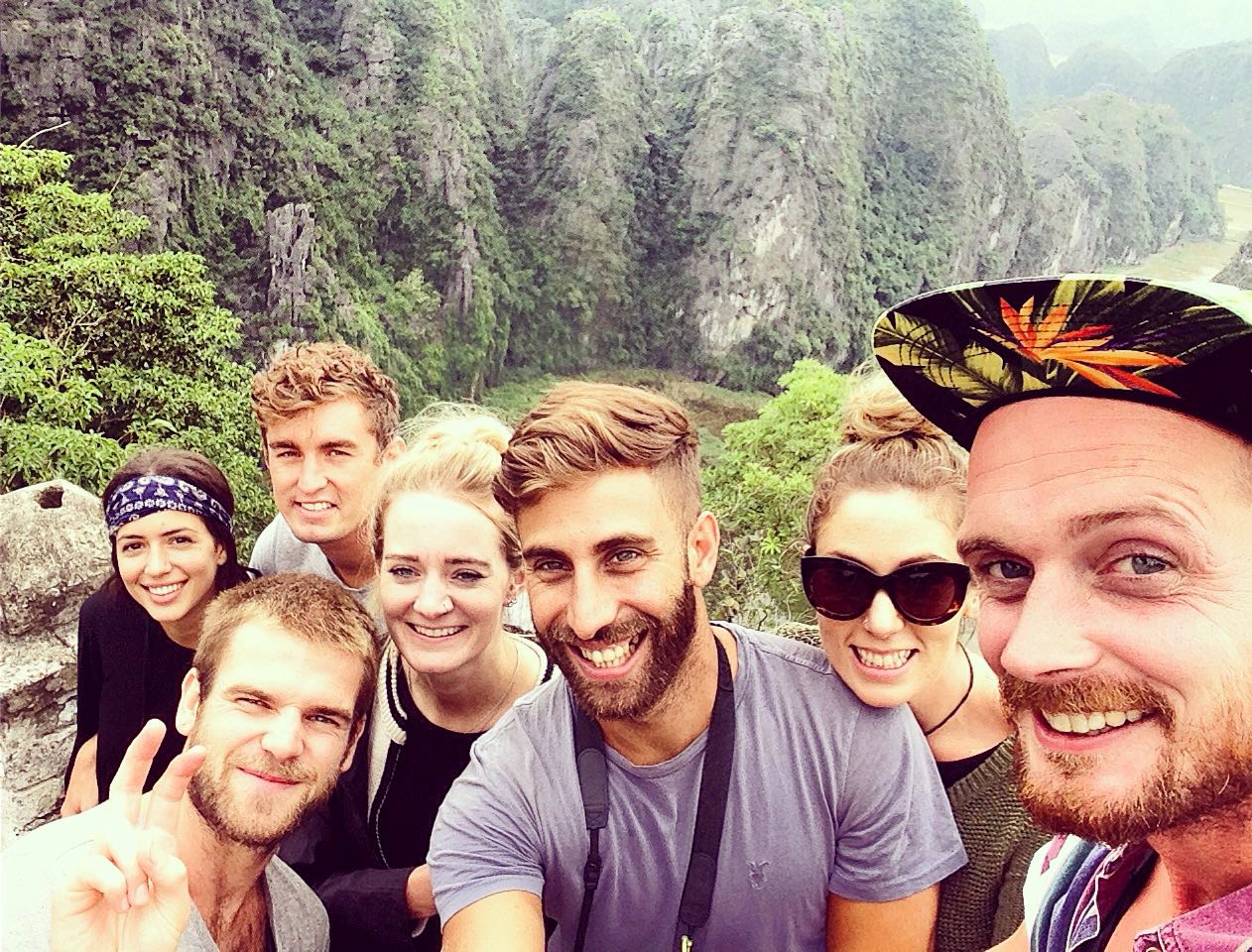 As we’d been in so many small towns around Vietnam with only Pho on the menu we were feeling slightly Pho’d out so when we spotted a huge supermarket we were OVERJOYED. Cue lots of running around grabbing all of the snacks and toiletries. Who would have thought a few months back that it would be possible to get so excited by a supermarket? Well, here we are.

After a full on day of touristy endeavours around Ninh Binh, it was time for our first lengthy sleeper bus – a whole 8 hours armed with a whole host of carby friends. On asking the driver where the bin was, he gladly took the rubbish and threw it straight out of the window. Like WHAT?!

On arrival in Phong Na the bus station was right next to our hostel which hadn’t happened, once, ever, in our backpacking lives so this took the pain away from being woken by a Vietnamese man yelling “wake up Phong Na, get up now” at 5 am. Which is never appreciated!

Check in wasn’t until 1 pm but our hostel had already let us know that there were sofas and hammocks to nap in until our room was ready… Dreamy! Our hostel was called “Easy Tiger” and served THE best food (both Vietnamese and Western) making it difficult to think of venturing anywhere else, on top of this there were leopard print duvets and the staff were so helpful. You know it’s a good hostel when they’re not listed on booking.com/ Agoda and they’re full every night purely from word of mouth!

Phong Na where do I start?! Caves on caves on caves. Anybody that has me on Snapchat knows I’ve become somewhat of a cave connoisseur.

Dark cave, the cave of all caves

But there is one cave that trumps all caves and that is the mud cave or dark cave as it’s formerly known. First up, you’re harnessed up to zip line to the cave (my first zip line ever so naturally I was crapping my pants and hanging on for dear life)! Before swimming into the cave with nothing but a life jacket and a torch strapped to your head. Not going to beat around the bush, we headed there at 3 pm so the water was freezing and I was glad of the life jacket which covered my very obvious peanut smuggling!

Then you walk further into the cave where you find the mud, by this stage it’s pitch black and you psychically cannot see a thing without the floodlight attached to your forehead. The mud is great! Once you get over the squelch and throw yourself in, and realise your whole body floats its hilarious! Picture a bunch of twenty-somethings surfing on their stomachs on top of mud inside a cave… Mental! 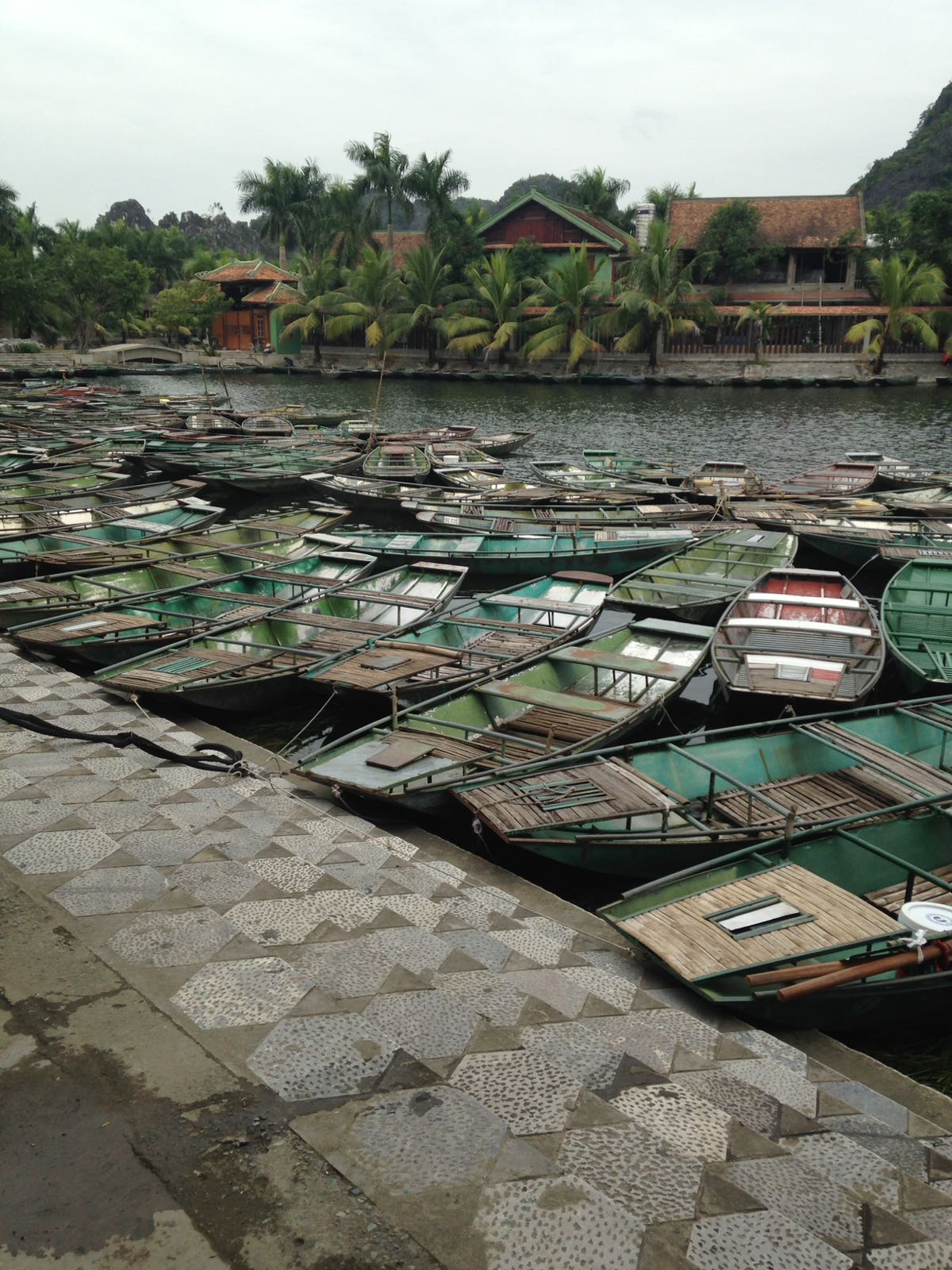 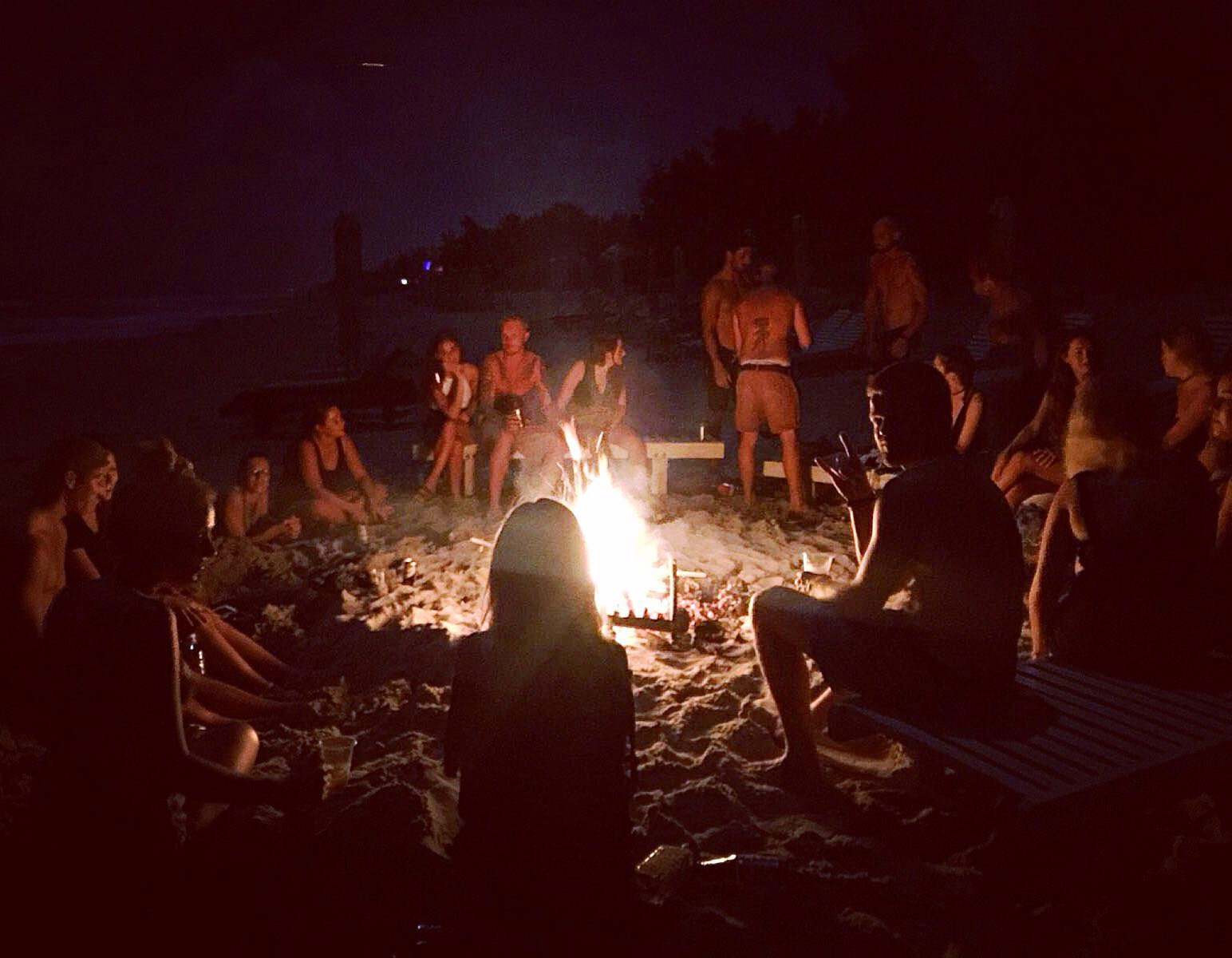 The next day we headed for Hoi An via the Hai Van Pass (Top Gear Route) which was not something I was too fussed about initially as I hadn’t even seen the bloody episode! Also, it was raining, I was back in my plastic poncho and the jitteriness of the geared bike Dem had decided to rent kept making us bang helmets! But once the sky turned pink and I spotted a strip of beach I was so glad we did it (don’t tell Dem).

Arriving in Hoi An we checked in to Under the Coconut thanks to our pal James who hadn’t stopped banging on about it since we met him in Chiang Mai. But my my my did it live up to estimations. It has its very own beach for starters, after two months of travelling with no beach it was like a real-life oasis complete with Mojitos and memory foam mattresses!

Can I just hold up real quick and discuss the mattress sitch. Mattresses in Vietnam up until this point had been a myth, as in we may have been sleeping on the floor for the amount of comfort they offered. But Under the Coconut was next level, I actually felt as if I was sleeping on a bamboo cladded cloud surrounded by rushing waves. To top this off they offered to light a fire for us on the beach in the evenings where we could have a few drinks and chill out. If it wasn’t for our dwindling time left in Vietnam we’d probably still be there, Mojito in hand.

Packing up and jumping in a taxi to pick up our visas I cleverly managed to leave the most important bag with all the electricals, bus tickets (you name it, it was in there) in the back of the taxi. Tears ensued. Dem was doing the most strained smile but looking very much like he could strangle me at any moment. Thank god the Vietnamese are an honest nation, within 10 minutes the driver had returned our belongings safely. Thank God!

After the stresses of nearly losing all of our most important possessions, I headed straight to the salon for a mani-pedi combo. After 2 months of travel the state of my feet was an embarrassment, so naturally, I spent the first 5 minutes apologising profusely (why do us Brits always do this?!)