Our journey from leaving Costa del Clacton at 3 am on Monday including a layover in Cologne and a taxi ride from the airport saw us arrive at our hotel in Bangkok at 11 am local time on Tuesday (26-hour journey).

Although it wasn’t a bad journey there were a few hairy moments. The plane from London to Cologne was fine apart from the aborted landing. Aborted bloody landing!! The plane was 3 feet away from the floor, ready to land, I had my “just touched down” snapchat at my fingertips when the bloody plane speeds up and flies off again.

I turned first to Dem who looked equally confused and then at the older lady on my right who offered me an explanation and a fruit gum. Apparently, this is very common and likened to missing a turning on a motorway when driving. Like any sensible 28 years old, I cried. Tears were actually streaming. It was one of those moments where I thought this is where I’m going to die and I didn’t even have a last meal because due to travel sickness I threw it up in terminal 2.

Whilst in Cologne we did as any true Brit does and headed straight to the bar. Having never been to Germany before it did amuse me that the only thing I was seeing was the airport. Thoughts on Germany; friendly people, very reasonable priced prosecco and the toilets smelled like Yankee candles, which was, of course, a plus. In a cloud of prosecco, I managed to leave Dem’s travel pillow somewhere in departures in my rush to take a selfie with a stuffed monkey. Best girlfriend ever.

Whilst on the flight from Cologne to Bangkok the alcohol is in full effect and I manage to flick the button for the stewardess to come over. Not once, but three times, all by accident whilst playing animal-match on the in-flight screens. You can only imagine how popular I was…

After 11 hours on the flight from Cologne to Bangkok with slightly curved spines, we made our way out the airport and into a taxi. The taxi being bright pink with spinning gold rims and extravagant lights on the roof, it was like something out of pimp my ride, giving us an instant feel good vibe about the city.

Arriving in Bangkok the first thing that hits you is the HEAT. I could feel my eyebrows sliding off my face and Dem had taken the first opportunity to take off as many clothes as socially acceptable. Also, the smell of street food is overwhelming. Even if you’re not hungry, you’ll want to eat. Everything smells amazing! 10 minutes after our arrival we had caved and grabbed some Pad Thai. You can get a generous Pad Thai for the equivalent off £1, which in London would just about allow us both to use the toilets in Waterloo station.

A good night sleep, lay the foundation for the true tourist in us to come out. Camera & GoPro at the ready. 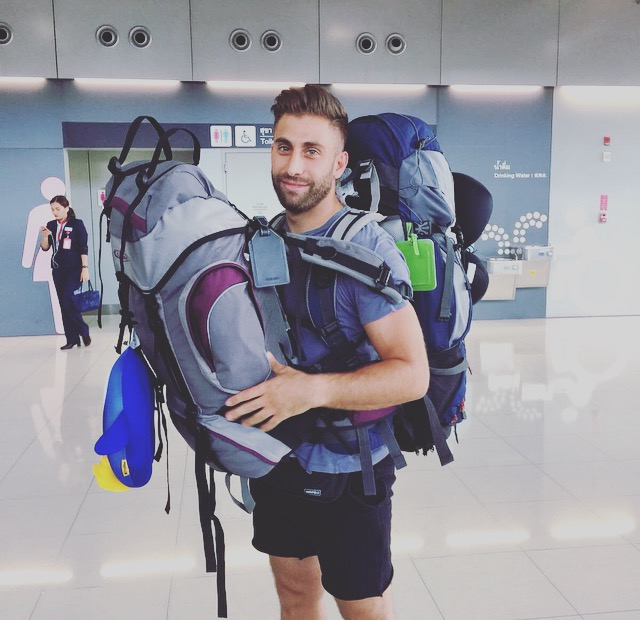 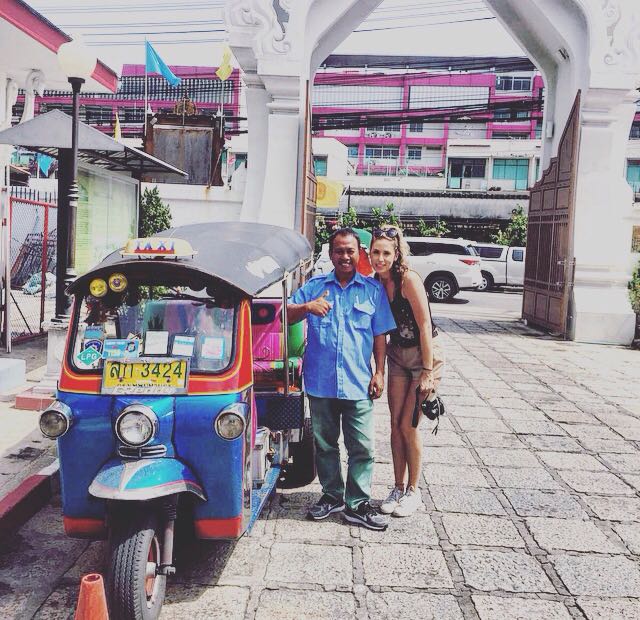 We started with a Tuk Tuk tour of a selection of temples for 20bhat (about 40p). Which in itself is a Barry bargain without the tour! The driver gives you a bit of background whilst taking you to the temples. If you can handle the crazy driving, you can jump out take photos and he will wait and then take to to the next one. Standing, happy, lucky, reclining – I’m not talking about snow white, I’m talking Buddhas. To be honest, we didn’t realise there were so many temples in Bangkok, with over 400 and more gleaming gold buddha’s than you’re ever likely to see in your life, it really is a lot to take in, but well worth it.

A boat trip through the canals was top of our To Do List in Bangkok, so much so, that Demi happily handed over a stack of money straight away. Even with his fancy app that helps you to budget for your entire trip (more deets on this later) he got a tad overexcited and handed over a wad of notes to a particularly smiley Thai man whose children we just accidentally put through private school. The long boat was definitely a highlight though and a world away from the Fay Bans and lady boys of Khao San Road. Funny that this coincided with me only having two spring rolls to eat all day – him and that app. I mean we are all slightly over budget so now he is on a mission to get us back to where we should be, which apparently doesn’t involve me eating much or buying new shoes.

Are you actually from London?

One thing we didn’t expect was the look of genuine surprise from our Tourist Info guide on our newly brown state. She actually asked why we were so brown if we were “supposedly from London” (obvs day made!) People with unnaturally white faces are everywhere. I knew skin lightening was a thing but didn’t realise we’d see so much of it, secretly wondering if the OTT culprits are not so dissimilar to the fake tan addicts in the U.K?!

Another thing we learnt about Bangkok, is that you can get a beer anywhere. By the pool, in a vending machine, wandering along the road, with breakfast, lunch, dinner? My man Chang always has your back. Even on a long boat down the canals visiting the old town, a Thai lady pulls up alongside to offer you an assortment of beer or snacks.

To be totally honest I thought I was doing pretty well with this travelling lark with a few temples and a cheeky tan line or two under my belt. But whilst repacking our backpacks to leave Bangkok it dawned on me that we’d been staying in a relatively nice hotel for two nights with a super comfy bed, the most flattering mirror and those cute mini shampoos and conditioners. Now was the time for the actual travelling bit.. & I wasn’t prepared one bit.

After laughing his arse off at my vaguely panicked expression and explaining that travelling doesn’t usually come with AC & two rooftop pools he managed to reassure me that it would still be a lot of fun (we also met in the middle and agreed to get our own bathroom in the next hotel come hostel which eased the rising panic that was growing inside me).

So our (not so travel) hairdryer is packed, I’ve bagged the free hotel toiletries and I’m only moderately afraid of what the next leg of our journey has in store for us. Ayutthaya we’re coming for ya!