We were lucky enough to be invited along to review The Duck and Rice for dinner with Bear. Having visited a few months previously and knowing the quality of food, I was more than ready to see what was quacking!

The Duck and Rice: Dog friendly

There are so many pubs and restaurants in London that claim to be dog friendly. And by “dog friendly” they shove you into a corner and keep one beady eye on your furry friend for the entirety of your stay.

But I was pleasantly surprised that although it was a busy Saturday night, we were given a large table in the centre of the restaurant and little Bear the influencer, was given her own damn chair. I am done. How perfect could one place get? 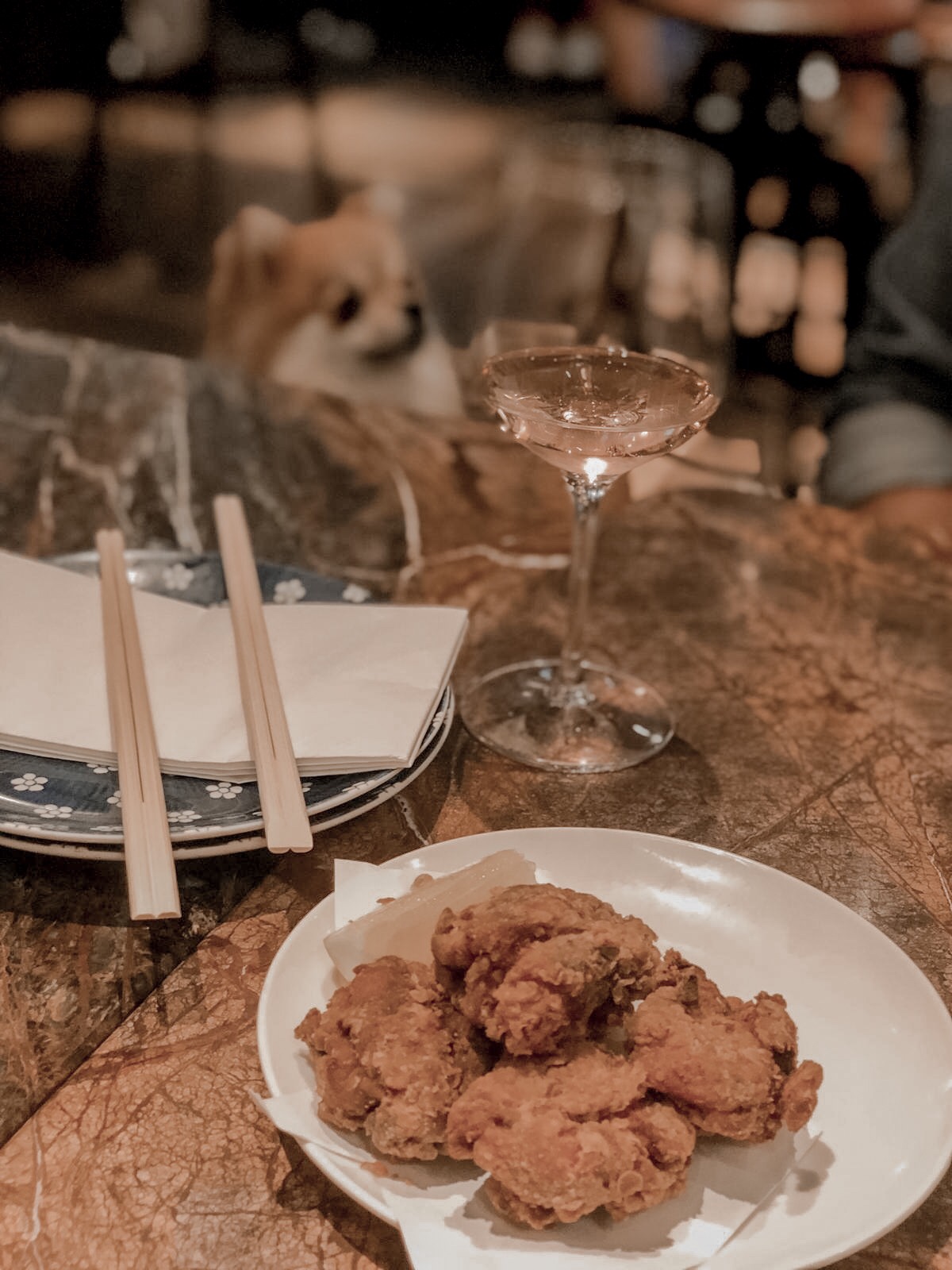 The Duck and Rice: Food

The menu here is based around sharing and social eating. Which always concerns me when dining with Dem as he eats like a horse and has been known to finish my food when I’ve popped to the ladies. But I needn’t have worried – the portions are more than sizeable. I think 4-5 dishes between two would be plenty, naturally Dem got over excited and ordered six.

We started off with a lovely bottle of rose (the clearer the better) gone are the days of drinking pints of blossom hill! To go with this we had five spiced fried chicken which Dem had ordered before I’d even picked up a menu.

Which to be fair was a bloody good shout, each piece was so tender, followed by some char siu buns which are a typical street food staple in China. These disappeared pretty much as soon as they were laid on the table. Defo order these! 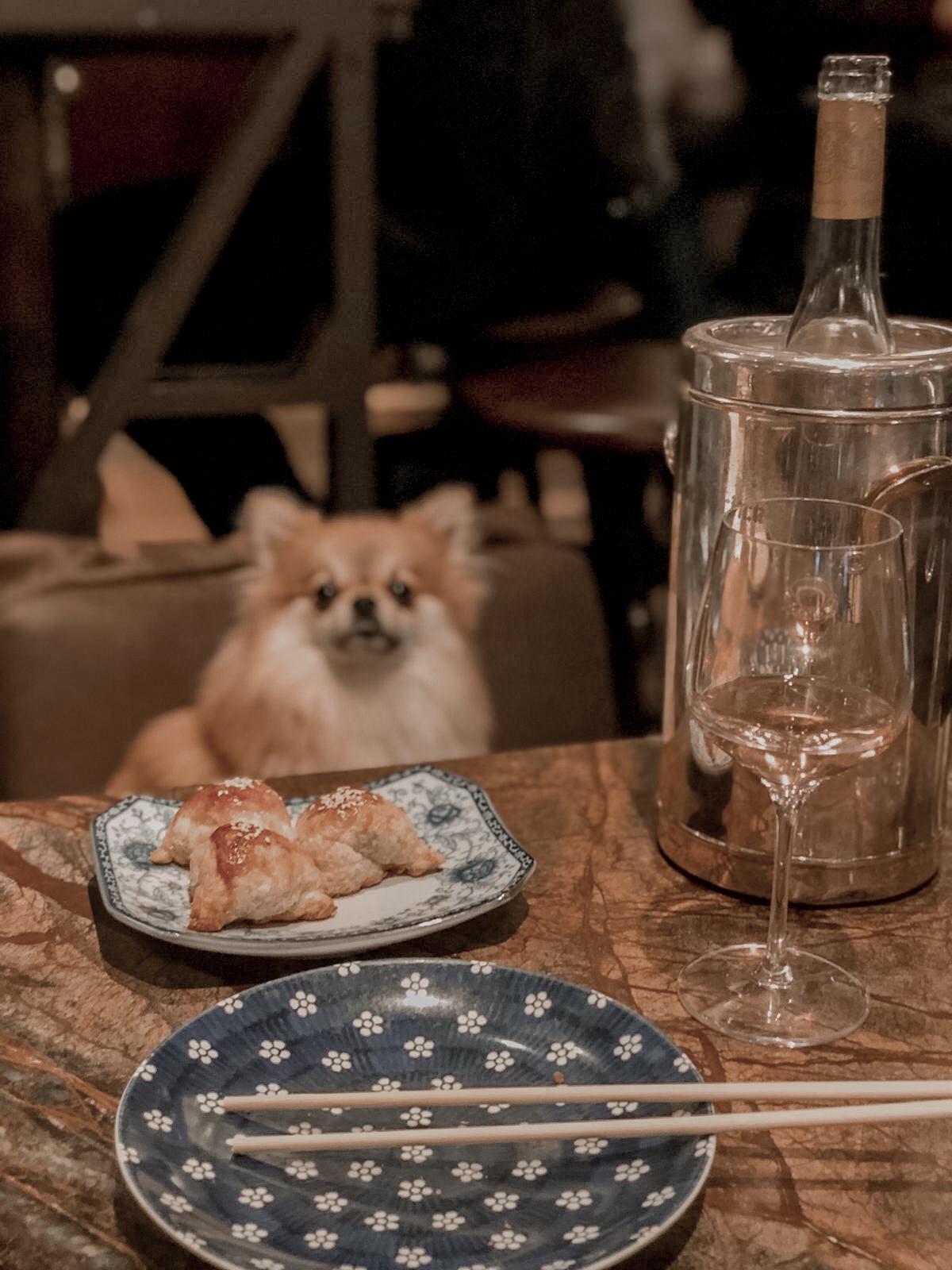 Shortly after we’d finished the first two dishes, Bear decided to dine and dash, and ran across the table. Luckily Dem managed to scoop her before anyone else noticed, but seriously all I could think was, are you ducking kidding me?!

We also sampled the venison puffs, chicken chow mein (number 23) and kung pao chicken – all delicious. But the real show stopper here was the crispy aromatic duck. Oh my goodness – is there anything better than duck and pancakes with lashings of plum sauce??

Bear even sampled her first ever piece of duck and as you can probably tell by her expression, she thought all her Christmases had come at once. 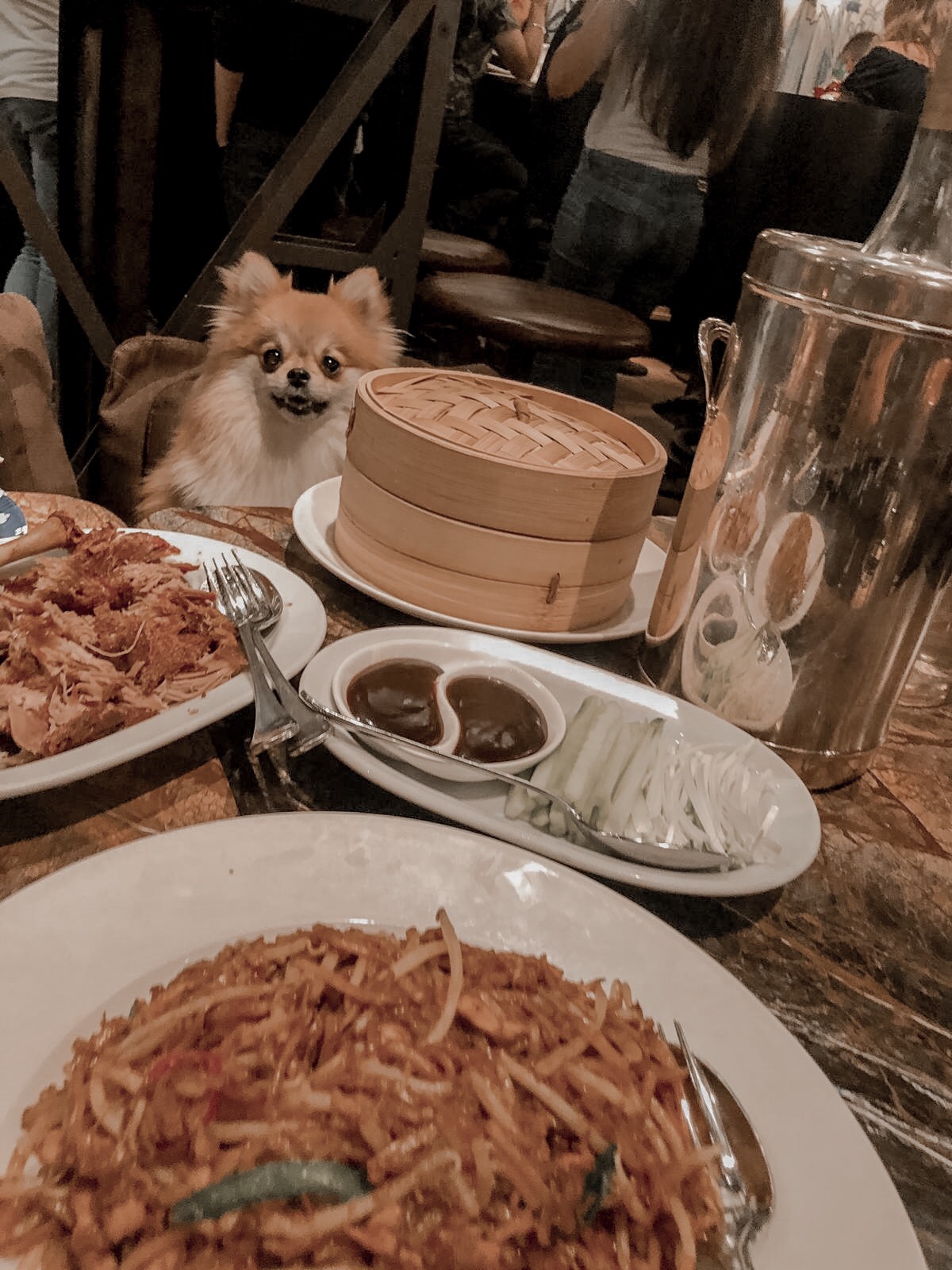 The Duck and Rice: Atmosphere

Set over two floors with a gothic feel to the decor, this place feels boujee without being too try hard. Every time I’ve visited, The Duck and Rice has been buzzing and every table is occupied which is a damn good sign.

I visited as part of a large group a few months ago and the attention to detail and quality of the food was exactly the same as when we dined as a three. Winner winner, chicken dinner. You could easily pop in for a quick lunch or make a night of it and spend the evening. 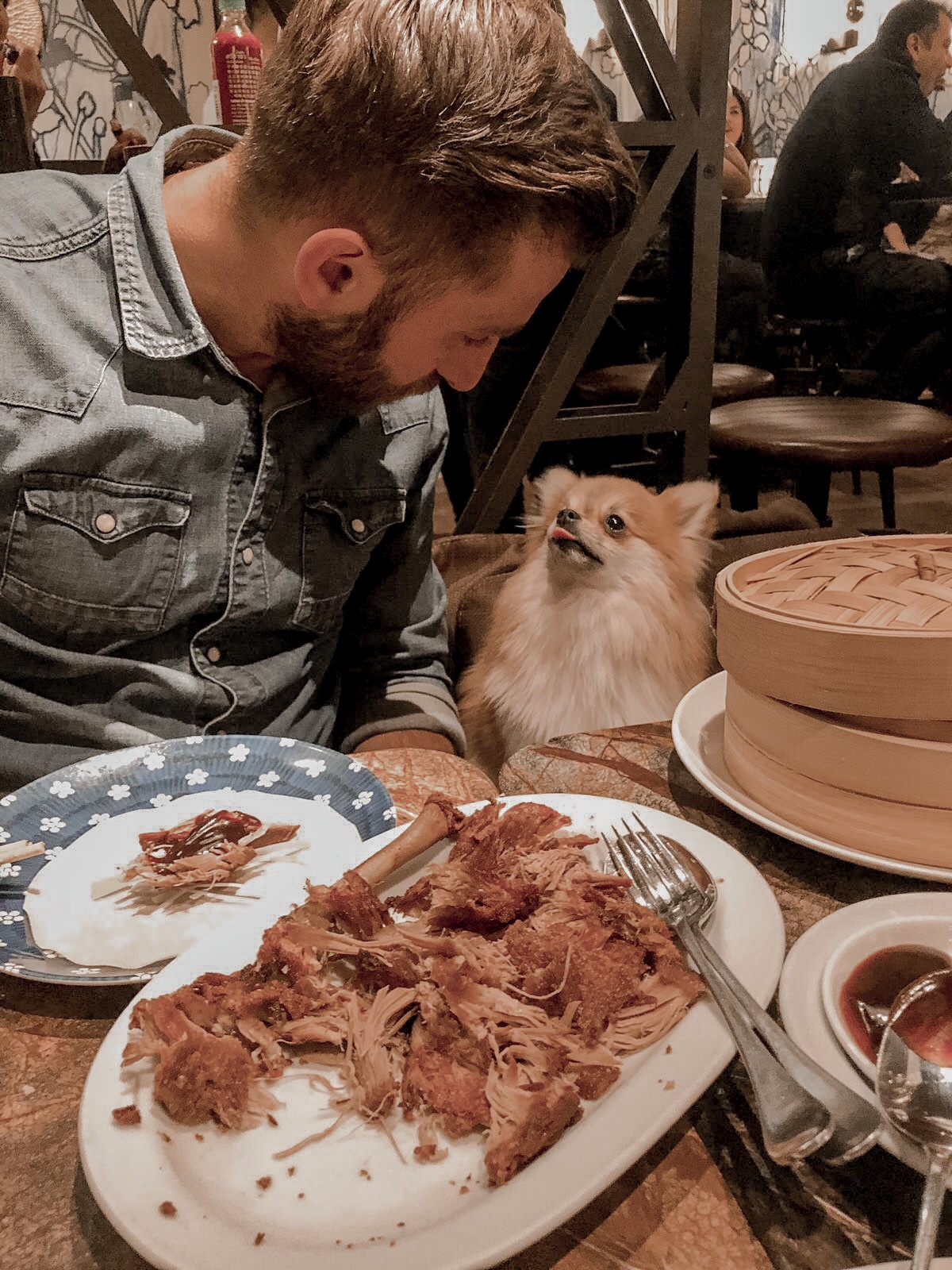 Can I just add that they serve up 8 different types of Gin and Tonic. My inner basic bitch was practically screaming. As well as a whole host of beers, cocktails and over ten teas to choose from, you’re guaranteed to find a tipple to tickle your fancy.

Something I didn’t realise until very recently, is that The Duck and Rice run a drag queen quiz night on Sundays. Which sounds like just about the best idea ever. Naturally Bear and I will be heading there quicker than you can say “Sashay Away!”.

Have you found any dog friendly gems in London to share? xo

*I was kindly invited to dine at The Duck and Rice – where we were gifted complimentary drinks and food. But all opinions are my own. 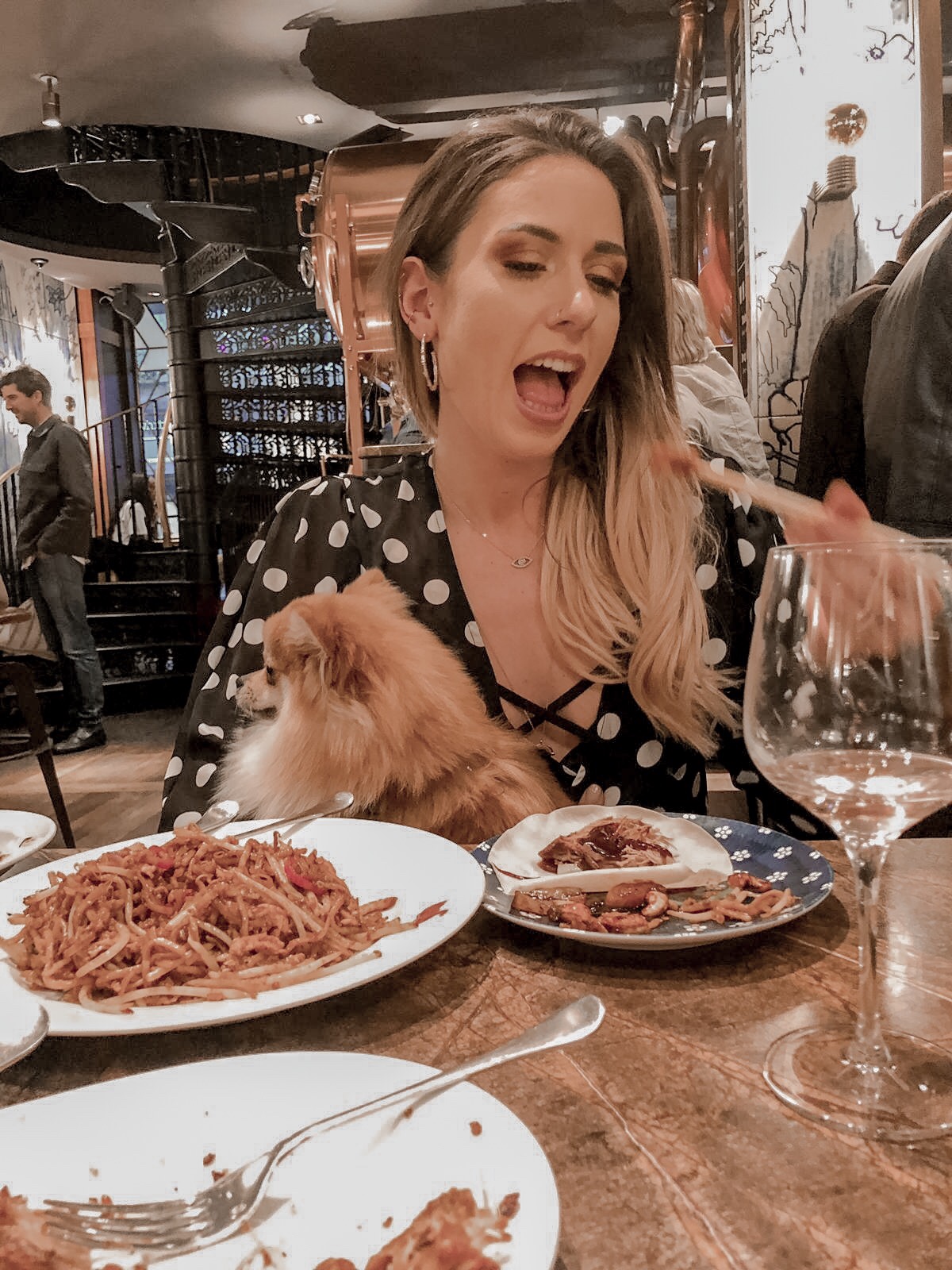 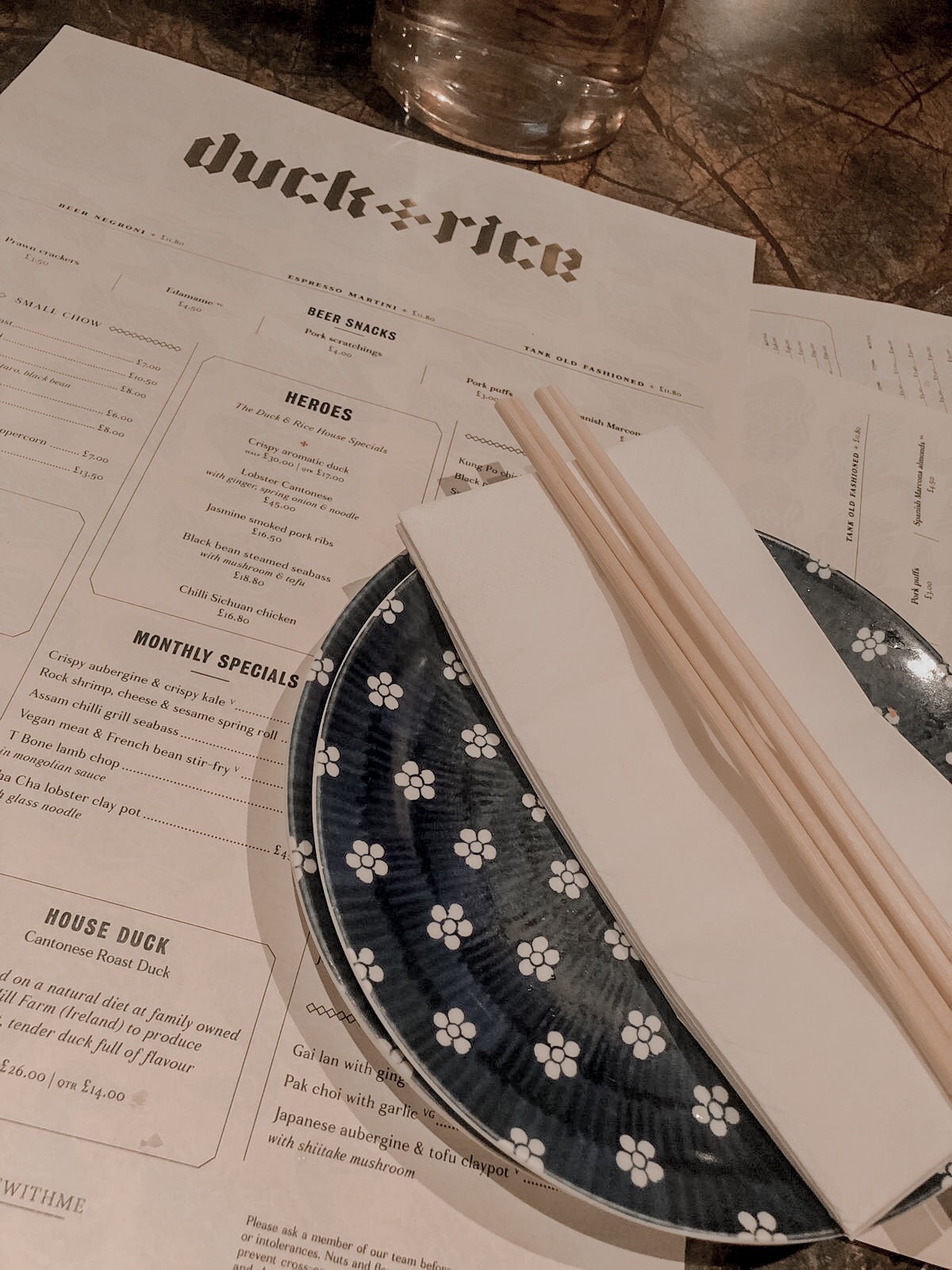